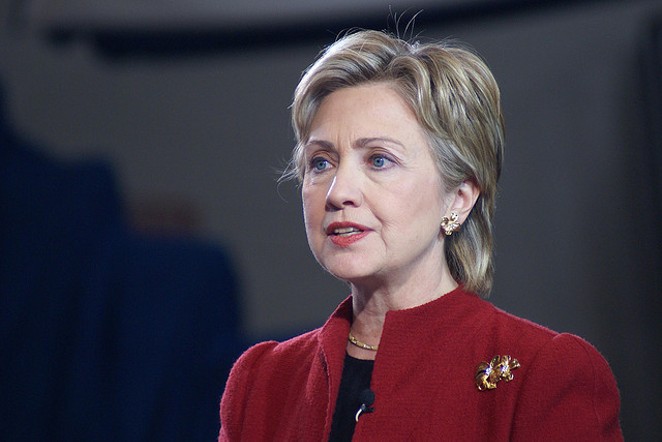 Seven other people were wounded by Harper-Mercer, who died in a shootout with police.

Politicians, including many who are running for president, quickly responded to the tragedy. Hillary Clinton, a Democratic presidential hopeful and former Secretary of State, said this to the press after an event in Boston:

This isn’t the Bonehead Quote of the Week because of Clinton’s disbelief in the face of something so shocking and horrific. It’s because she should absolutely understand why these continue to happen. It's because lawmakers have done literally nothing to try and prevent these kinds of tragedies from occurring.

Halting America’s epidemic of mass shootings is a complex problem which will require a series of complex solutions. But at the moment there’s no one in America with the appetite, moral fiber or political sway to enact any of them.

Republican politicians took the opportunity to lobby for fewer gun restrictions, insisting that the answer is to intensify screening for mental health issues.

This second part is absolutely true. We should treat the mentally ill as a priority. If someone shows any signs whatsoever of being capable of such an atrocity, it should be easy for them to get help. It shouldn’t be stigmatized, it shouldn’t be expensive. If we are to ever keep Americans from shooting each other at alarming rates, this must be part of the solution.

The same goes for people who push for easier access to firearm training and stiffer penalties for violent offenders. Those must be part of any solution to this problem.

But it’s absurd and childish to reject out of hand anything that might make it harder to own a gun. To not see the relationship between gun ownership in America and gun-related deaths in America is an incredible feat of willful blindness. Those who spit and recoil at the term “gun control” without any willingness to compromise are part of the problem.

These events happen so often that we can predict the exact response from all parties involved, and it’s had a numbing effect on us. That they occur with such regularity is demoralizing, tragic and unacceptable, but it is not beyond comprehension. It is exactly what we should expect.