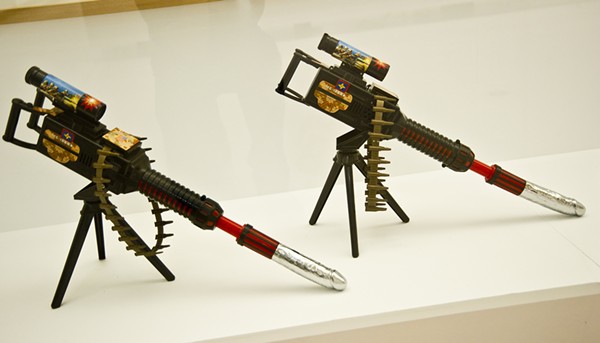 Students at the University of Texas at Austin plan to protest the controversial campus carry law when it goes into effect next year, and they'll use gigantic cocks to hammer home their message.

The big, swinging dicks are intended as an in-your-face display of the irrational absurdity of state laws and university policies that will allow concealed firearms in classrooms next year, while continuing to classify forms of sexual expression as Class C misdemeanors. To put it another way, when campus carry goes into effect next year, it will be legal to carry an extension of your penis on campus, but illegal to carry around anything that actually looks like a penis.

Governor Greg Abbott signed campus carry into law last June after it was passed by the Republican-dominated state legislature. The law requires public universities to allow handgun license holders to carry concealed firearms on campus. Private universities can opt-out of adopting a campus carry policy, and all universities may choose designated gun-free zones within their campuses.

The law goes into effect August 1, 2016, the same day as the 50th anniversary of the UT Tower Shooting, when Charles Whitman shot 43 people, killing 13, from atop UT's iconic clocktower. Texas Monthly calls the shooting first mass campus murder in America.