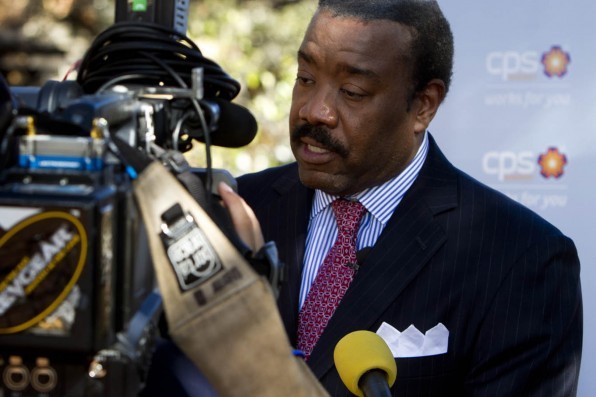 Just when it looked like CPS Energy CEO Doyle Beneby might bolt for a new gig, the utility's board of directors is bending over backward to keep him at the helm, according to a report by the San Antonio Express-News.

Beneby has been the top dog at CPS since 2010. It was announced on September 16 that he would become the CEO of the Chicago-based renewable energy company New Generation Power International. Although CPS has tapped a consulting firm to search for his replacement, Beneby agreed to delay his departure by a month, pushing his final day to October 30.

Beneby’s total compensation from CPS is over $700,000. His offer from New Generation allows him to leverage the best possible deal, and CPS is playing along by offering him a new, surely more lucrative contract. But is clinging to Beneby at an even higher cost what’s best for San Antonio?

Councilman Joe Krier, for one, doesn’t think so. Krier sent out a news release this morning praising Beneby for his work at the country’s largest municipally-owned utility, but urged its board of directors to move on.

Krier said he was “disturbed” by the prospect of extending an offer to entice Beneby to return.

“Mr. Beneby is not indispensable. No executive ever is, either in the private or public sector,” Krier said. “I urge CPS Trustees to wish Mr. Beneby well and let him move on to the next phase of his career. I’m confident he will accomplish a great deal in Chicago. For its part, CPS’ Board should focus on finding a top-shelf CEO willing to work within the fiscal constraints of a publicly-owned utility.”

Beneby's new contract with CPS could allow him to have his cake and eat it too by continuing to lead the utility and taking on some sort of advisory role with New Generation.

“I’m flattered that our board has worked so hard over the past few months considering strong CEO candidates and has still concluded that it is worth their effort to present a creative proposal that might allow me to satisfy both of my interests. Obviously, it’s something that I will seriously consider after discussion with my family,” Beneby said in a statement, according to the Express-News.

Beneby plans to make a decision by next week, according to the Express-News. If he does re-up with CPS, he will be the second high-level municipal employee to recently return to a former position. San Antonio Police Chief William McManus returned to the force on October 5 after a brief stint as head of security for CPS.

Although City Council members unanimously approved McManus’ appointment, some questioned the manner in which he returned to the job. McManus reached out to City Manager Sheryl Sculley as she interviewed candidates to replace him. Councilman Cris Medina pointed out that conducting a search this way could make top executive talent think twice before considering a gig in San Antonio.

Beneby’s situation isn’t completely analogous to McManus'. But it raises important questions about the city’s collective ability to know when to let go, and what the costs of not doing so are.