Early voting for this year’s set of constitutional amendments is almost done, and you probably haven’t voted yet. And odds are you won’t vote at all.

That’s not an indictment on you in particular, or your degree of civic engagement. But it is a safe bet, given historic trends.

Bexar County is notorious for low voter turnout. In the mayoral runoff election in May, less than 100,000 people — about 11.9 percent of registered voters — decided who would hold the city’s highest elected office. And if people won’t get out and vote for the mayor, why the hell would they vote for anything currently on the ballot?

The short answer is, they probably won’t. Or at least very few of them will. The seven propositions up for a vote — which include raising residence homestead exemptions for public schools, allowing pro sports teams to hold charitable raffles and recognizing the people's right to hunt (just in case folks forget that's legal, I guess) — aren't the kind of hot-button topics that kindle people's inner Susan B. Anthony's.

So Constitutional Amendment Elections typically garner low turnouts both statewide and in San Antonio. Since 2001, voter turnout in Bexar County for such an election has topped 10 percent just once. That was in 2005, when a contentious and divisive amendment over denying legal status to same-sex marriages drove an inordinate number of people to the polls. 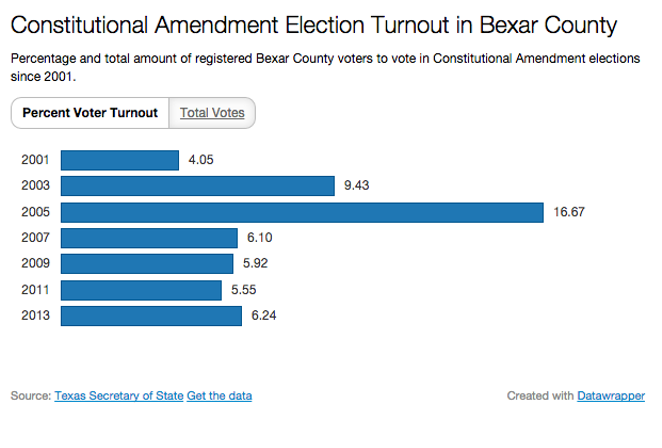 Early voting ends on October 30. If you don't make it to the polls by then, you can brave the lines (if there are any) on Election Day: Tuesday, November 3. Find your local polling place here.