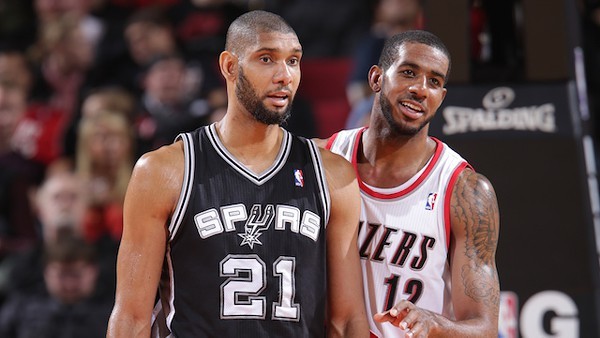 But who has Duncan bested most often? Which teams have he and the Spurs blown out, and which have put up a fight?

The three graphs below shed a little more light on Duncan's record number of victories. Check them out to learn which team he's beaten the most, the Spurs' margin of victory by opponent and Duncan's average scoring against each team:


There are a few interesting takeaways from this:

-Most of Duncan's wins have come against traditional Western Conference doormats: the Los Angeles Clippers and the Golden State Warriors. Although both teams are now among the league's best, they've been terrible for most of Duncan's career.

-Duncan has recorded the fewest victories against the Brooklyn Nets, which makes sense since they've only existed since 2012, when the team moved from New Jersey. But each of those victories has been a blowout; Duncan's wins against Brooklyn have the largest margin of victory of any team he's faced.

-Duncan has never attempted more than two 3-pointers in a victory, and never made more than one.

-Duncan's toughest wins have come against Western Conference rivals. The four teams against which he has the thinnest margins of victories are the Houston Rockets, the Phoenix Suns, the Memphis Grizzlies and the Dallas Mavericks. The team's overall margin of victory in games Duncan has played is 12.8

-Most of the wins have come in San Antonio. Just over 57 percent of Duncan's victories were at home.

-Duncan has only come off the bench in one of his wins: A home game on March 18, 2004 against Minnesota. Despite coming off the bench, Duncan still posted 22 points and 10 rebounds in 27 minutes. The Spurs won by 20.