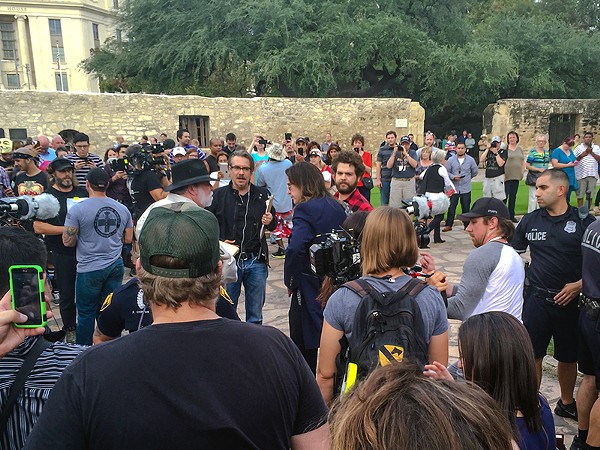 Sure, we're supposed to remember the Alamo, but we can forget a little incident involving a metal icon and a sprinkling of pee, can't we?

While his notorious visit to the Alamo will forever be marred by piss, Ozzy Osbourne's return 33 years later will likely be described as a shit show, all thanks to a little leak.

Osbourne's return to San Antonio, where he infamously desecrated the monument dedicated to the defenders of the Alamo, was supposed to be a bit more under the radar. He and his son Jack filmed segments in Texas this week for an upcoming History Channel show, which the elder described as a "father-son spoof on history" in an interview with Billboard last month. Jack is the show's producer.

The plan was to blend in as tourists, you know, except with a film crew in tow. Just go in, learn some Texas history, do a little apologizing and get out without peeing on anything.

That plan went out the window Wednesday evening when District 1 Councilman Roberto Trevino lit it slip that the Ozzman cometh during a televised forum. After an initial report from the San Antonio Express-News, social media lit up with .

Stephen L. Hardin, a McMurry University history professor who was hired by the show to be the Osbourne's official Alamo tour guide, said he was sworn to because the attention could disrupt filming. "We didn’t want a mob scene," he said.

But onlookers began arriving in Alamo Plaza Thursday morning and by the Osbourne's 4 p.m. arrival a swelling crowd of Osbourne fans — and perplexed tourists — swarmed the musician's black SUV, chanting his name as he emerged. This titan of heavy metal could barely be made out among the throng as he was escorted by security and local law enforcement to the famed San Antonio mission.

Ozzy Osbourne got a hero's welcome when he returned to the Alamo on Thursday.


Osbourne, who I think we can all agree has mellowed out a bit, appeared uncomfortable by all the attention as Jack thanked the crowd for the "San Antonio welcome" and implored everyone step back and give them room to film their segment. Fans continued to cheer — "Ozzy for President" — as Harding gave the two a Cliff's Notes version of Texas and Alamo history. The metal god and his progeny where then whisked inside the Alamo for a guided tour.

Off the rails/Crazy Train. #ozzy #Alamo

Thirty-three years ago, fans revolted after Osbourne defiled the Alamo Cenotaph, but on Thursday, fans celebrated his triumphant return to the scene of the crime, making it plainly clear that even though they remember Ozzy and the Alamo, they won't hold it against him.