Did the First Thanksgiving Actually Happen in Texas? 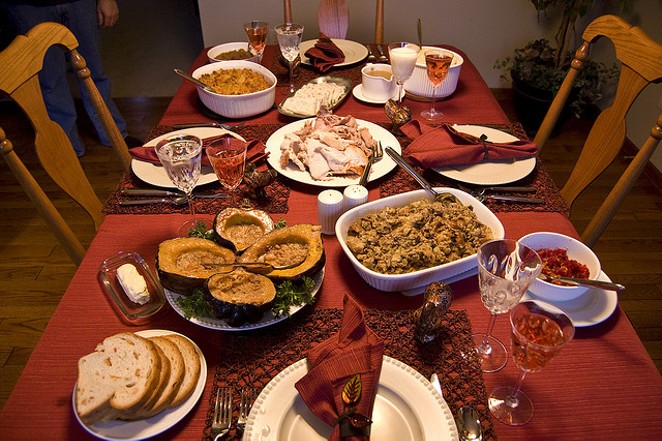 The story surrounding the so-called “First Thanksgiving” is a familiar one: in the spirit of peace and fellowship, European pilgrims near Plymouth Rock in Massachusetts shared the bounty of a successful harvest with local American Indian tribes.

To celebrate, we now stuff ourselves full of carbs and gravy, watch football and then bludgeon each other for discount Blu-Ray players and LCD televisions at midnight. What a country!

But the origins of this fine tradition may actually trace its roots back to the Lone Star State. According to the Texas State Historical Association, the first Thanksgiving-esque celebration may have occurred not in the northeast, but in Texas. 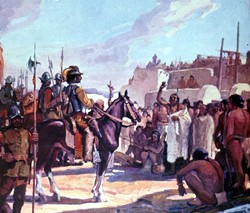 Juan de Oñate, a Spanish conquistador in late 16th-century Mexico, led an expedition to the Rio Grande near present-day El Paso. It was quite the journey; he brought over 500 people and 7,000 head of livestock.

The trip was an arduous one across the Chihuahuan Desert. For weeks they marched north, and five days before reaching the Rio Grande, the company ran out of food and water. People and animals scrambled for whatever sustenance they could find, pulling roots out of the ground as they struggled toward the river.

And the river was their saving grace. Here’s how the Texas State Historical Association describes the scene:

Both animals and humans almost went mad with thirst before the party reached water. Two horses drank until their stomachs burst, and two others drowned in the river in their haste to consume as much water as possible.

The Rio Grande was the salvation of the expedition, however. After recuperating for 10 days, Oñate ordered a day of thanksgiving for the survival of the expedition. Included in the event was a feast, supplied with game by the Spaniards and with fish by the natives of the region. A mass was said by the Franciscan missionaries traveling with the expedition.


European colonists and American Indians sharing a meal? Sounds pretty familiar to me. But remember, this all happened over 20 years those Johnny-come-latelies at Plymouth Rock had a similar idea. And they didn’t even have to traverse a desert! Although the ocean is fairly daunting too, I suppose.

It's also worth noting that, of course, it's not too important — or possible to verify — when the first Thanksgiving occurred. Multiple states have viable claims. Let's just be thankful that Texas is one of them.