Flores Market, the long-awaited downtown H-E-B grocery store will open on December 2, ending the years-long nightmare faced by downtown dwellers who were forced to leave downtown to purchase sundries and foodstuffs.

News of the store's opening comes via the San Antonio Express-News. The 12,000 square foot market at the corner of Ceasar Chavez Boulevard and South Flores Street is expected to have 50 parking spaces, four gas pumps, as well as an outdoor dining patio. 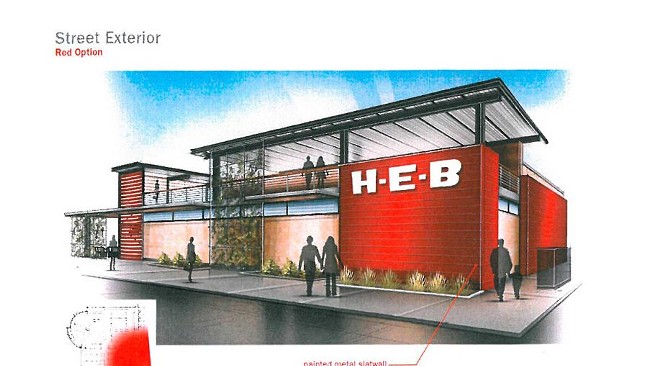 While downtown residents can soon cheer having a supermarket in the urban core, H-E-B's newest location did not come without controversy. The company agreed to move forward with the project only after City Council approved a measure to close a portion of Main Street — one of the few uninterrupted north-south routes through downtown — in order to make room for H-E-B's $100 million corporate headquarters expansion. The street closure sparked protests from neighborhood residents who complained about potential traffic increases and altered daily routes. As part of the closure and the downtown grocery store project, H-E-B agreed to fund improvement to mitigated anticipated changes in traffic.