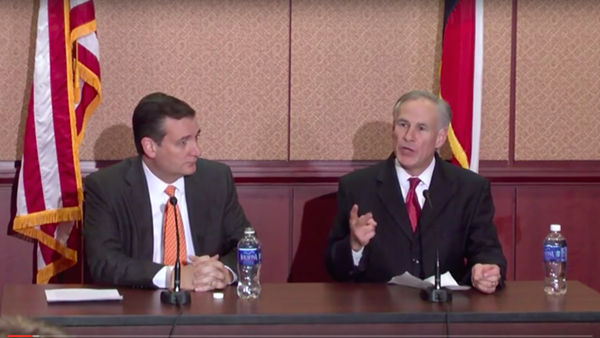 "Congress intended to give states a substantial role in the refugee resettlement process. The federal government and resettlement agencies have sidestepped that role," Abbott said, using familiar rhetoric, in a press release. "My top priority as Governor is to keep Texas citizens safe and this legislation helps me do that.”

Cruz wants to amend the Immigration and Nationality Act to allow Abbott — and a host of other governors — to reject resettlement for refugees unless the feds make "adequate assurance" that they aren't "a security risk."

“It is my hope that Congress will take up and pass into law the legislation that I introduced today that gives the governors the ability to opt out if the federal government is not sufficiently vetting refugees,” Cruz says in a press release.

The bill would require 21-day notice from the federal government to a state before a refugee is resettled.

Cruz also wants to keep out refugees from some of the places where people need escaping from the most, like Iraq and Syria. He wants a three-year moratorium on all refugees from places where terrorist organizations control a significant amount of territory.

For two men who constantly espouse Christian ideals, this seems to fly in the face of a religion where helping the less fortunate is a main tenant.

But, the devil's in the details, isn't it?