by Edgar Walters and Shelby Knowles, The Texas Tribune 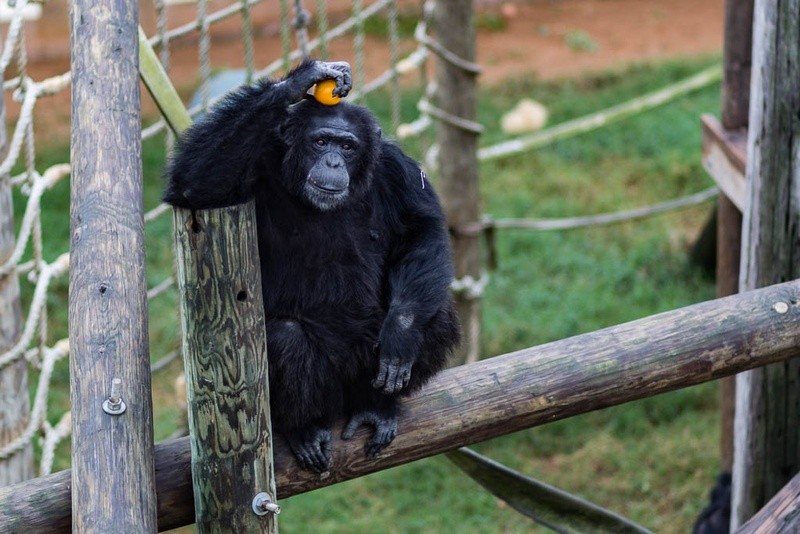 Tucked into the semi-wilderness a few miles north of this Central Texas town, within spitting distance of a federal prison, Nahja, a 25-year old chimpanzee at the Keeling Center for Comparative Medicine and Research, wraps a handful of woolly nesting material around her head into something that resembles a shawl.


When a handler calls her name, Nahja stretches out her massive hands and catches an orange — this morning’s treat — tossed from the observation balcony overlooking the 75-foot wide corral where she and the rest of her social group live. At the 381-acre facility, nearly a dozen groups of 9 to 12 chimpanzees wait for their oranges atop raised wooden platforms in the separated corrals that house the research animals.

Fruit treats, frequent veterinary checkups, behavioral experiments in which the animals can exchange tokens with scientists for a reward — this is the life of the research chimpanzees who live behind a 16-foot protective fence. But soon that could change.

Last month, the National Institutes of Health announced they would no longer support biomedical research on chimpanzees and that all federally owned chimps would be retired to sanctuaries. Animal rights advocates hailed the move, but it’s left behind feelings of anxiety at the Keeling Center, Texas’ major chimpanzee research facility and one of the largest in the country.

Though his facility has not conducted any biomedical experiments on chimpanzees since 2012, Abee said primate researchers were “continuing to learn from chimpanzees through these observational studies,” which he said would largely end when the animals live in a sanctuary. Roughly four percent of the chimpanzee population at the Keeling Center dies each year, Abee said.

The research facility, part of the M. D. Anderson Cancer Center, opened in 1975. It also houses monkeys and livestock animals. Scientists associated with the facility have studied cancer, hepatitis, HIV and diabetes, and before biomedical research was ended on the chimps, that included infecting some of the animals with hepatitis.

The chimps are set to be moved to Chimp Haven, the federally designated sanctuary near Shreveport, Louisiana, but it remains unclear exactly when that will happen. The sanctuary currently has room for about 50 more animals, and transferring chimpanzees is a “long, arduous process,” said Cathy Willis Spraetz, Chimp Haven’s president and chief executive.

But when they get there, she said, the chimps have access to a setting more similar to a natural habitat.

“We have open-air yards that are significantly larger, and then we have three multi-acre, wooded habitats,” Spraetz said. The sanctuary can house roughly 200 chimpanzees. 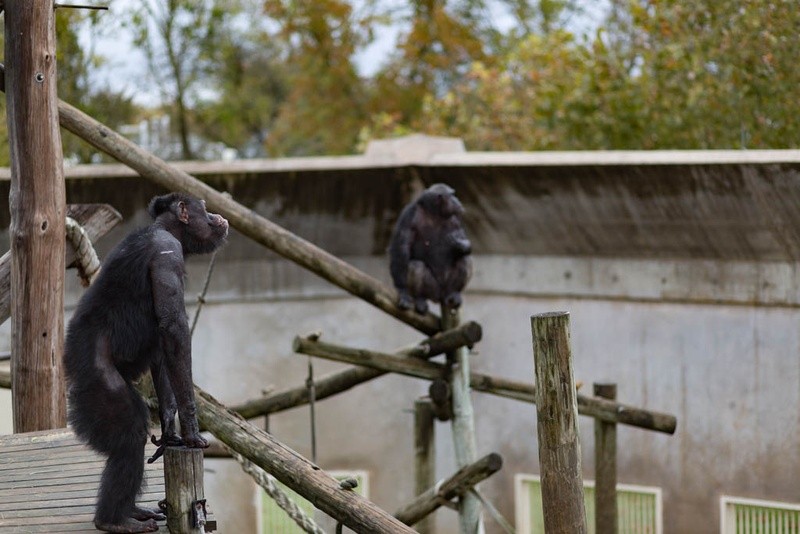 On Nov. 18, NIH director Francis Collins announced the end of federally funded chimpanzee research, saying the country had “reached a tipping point.” All federally owned chimpanzees would be relocated to sanctuaries “with careful consideration of their welfare, including their health and social grouping,” he said.


But if you ask the roughly 30 research and veterinary staff who work with chimpanzees at the Keeling campus, those considerations would be best served by allowing the chimps to live out their final years where they are — what Abee calls “retirement in place.”

About half of the Keeling Center’s chimps are older than 35, elderly enough to be considered geriatric. One of the center's 35-foot wide “primadomes,” geodesic metal domes with latticed wire exteriors, features gently sloping wooden ramps, resembling something like a tree house for a person in a wheelchair, or a kind of old-folks' home for the achiest and most arthritic chimps. Researchers here have published scientific articles about the effectiveness of chimpanzee acupuncture and other specialized geriatric care that Abee says is unavailable elsewhere.

For the federal government, paying for the chimps to remain at the Keeling Center is a more costly proposal than sending them to retire at Chimp Haven. The National Institutes of Health pay about $57 per day for chimpanzees living in Bastrop. At Chimp Haven, they pay roughly $41 per chimp per day. Private fundraising pays for one-fourth of the sanctuary’s costs of caring for the animals, Spraetz said.

“While cost should not be the primary issue, it is one of the issues,” she said.

Abee praised Chimp Haven’s facilities, but he said the stress of moving can take a fatal toll on older, more frail chimpanzees. Of the 13 chimps his facility had transferred this year to Chimp Haven, four died or were euthanized within the first three months, he said. Chimpanzees, an endangered species native to West and Central Africa, can live to 60 years in captivity.

“I don’t mean this as a criticism of Chimp Haven, but we uprooted them, took them from their family groups, we moved them cross country, we put them in unfamiliar settings with caregivers who didn’t know them, and four died,” Abee said. “We would not have anticipated those four to die if they had stayed here.”

“You need to realize that we have close to 200 chimpanzees, the majority of whom are geriatric — they came to us geriatric — and they’ve done just fine,” she said. “It’s been an unfortunate event that several of the Bastrop chimps passed away, but there were valid reasons for them to have passed away.”

“Chimpanzees have been a critical animal model for researchers that has led to discoveries and treatments for a number of diseases, including Hepatitis, HIV/AIDS, Ebola virus and much more,” said Lisa Cruz, a spokeswoman for the Texas Biomedical Research Institute, in a prepared statement. The institute hosts the primate research center.

Cruz said the institute would “fully cooperate” with plans to transfer its 20 federally owned chimps to the Shreveport sanctuary. But, she said, the researchers “strongly believe the chimpanzees currently in our care are in the best possible environment, receiving the highest-quality care.”

Rachel Haller, a chimp handler at the Keeling Center, said the NIH announcement had given her some concern about job security.

But at a facility that has hired grief counselors to help staff mourn the loss of beloved animals, “my No. 1 fear is for the chimps,” she said.


This article originally appeared in The Texas Tribune, a nonpartisan, nonprofit media organization that informs Texans — and engages with them – about public policy, politics, government and statewide issues. Read the original story at http://www.texastribune.org/2015/12/15/central-texas-research-chimps-face-uncertain-futur/.

The Daily
Prev
Next