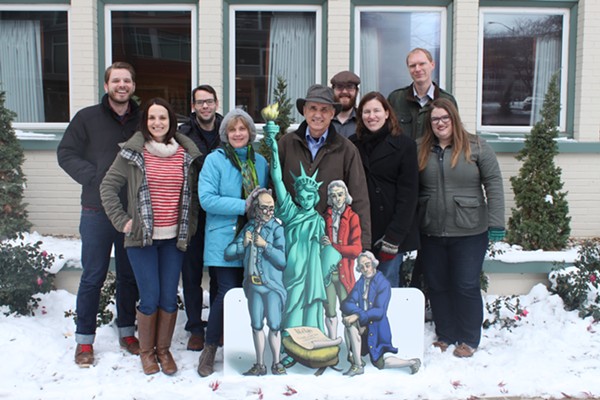 Christian nativity scenes are fine, and so is the Christmas tree, but a nativity scene featuring Benjamin Franklin, the Statue of Liberty, Thomas Jefferson and George Washington admiring the Bill of Rights in a manger is not OK.

"The exhibit is entitled “Bill of Rights [N]ativity and Winter Solstice [D]isplay.” The exhibit places the bill of rights in a manger and shows three founding fathers and the Statue of Liberty worshipping one of America’s founding documents as a replacement for Jesus Christ. This juvenile parody violates the Preservation Board’s regulations and should be removed immediately," Abbott wrote in a letter to John Sneed, executive director of the State Preservation Board.

To translate, anything that challenges the governor's religious beliefs or thought-provoking displays from people who think differently than Abbott amount to juvenile displays.

The group behind the display is called the Freedom From Religion Foundation. Staff attorney for the organization, Sam Grover, said Texas State Rep. Donna Howard agreed to sponsor the foundation's "equal time" display, which is privately funded and not endorsed by the state. The group needed a sponsor, as required by Capitol rules, before placing the display.

The group may take legal action against Texas, according to the Texas Tribune.