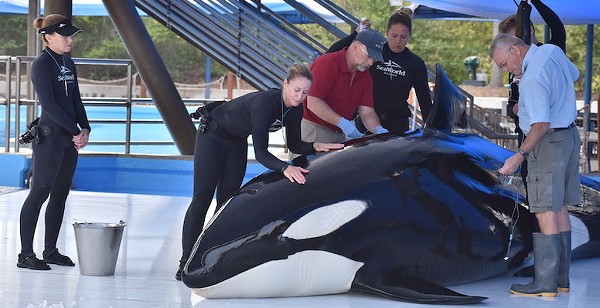 For the third time since July, a whale has died at SeaWorld San Antonio.

The theme park announced yesterday that Unna, an 18-year-old female orca, died "from a resistant strain of a fungus called Candida."

SeaWorld says in a statement that a team developed "a novel treatment plan in consultation with leading medical experts around the country," and that Unna remained under "24/7 care."

"This is a difficult time for the SeaWorld team and all of Unna’s many fans, and we thank you for your thoughts and well wishes," the park says. A necropsy will be performed.

The statement also notes that Candida, and fungal infections in general, are found in wild cetaceans.

According to an online version of The Merck Veterinary Manual, captive marine mammals "seem particularly prone to fungal infections."

This common mycotic disease in captive cetaceans occurs secondary to stress, unbalanced water disinfection with chlorines, or indiscriminate antibiotic therapy. Candidiasis is also reported in pinnipeds and has been found in cultures of wild cetacean blow holes and stomachs. In clinical disease in cetaceans, the lesions usually are found around body orifices.


People for the Ethical Treatment of Animals (PETA) Foundation Wildlife Veterinarian Heather Rally says in a statement that Unna is the 38th orca "used by SeaWorld" to die short of life expectancy.

"Though, it is in fact hard to call it 'living' when her 'life' consisted of being taken away from her mother just before her sixth birthday, being impregnated when she was only 8 years old and giving birth to a stillborn orca, and being so deprived of enrichment and the ability to engage in natural behavior that she obsessively picked at the paint on the bottom of SeaWorld's show pool floor until her face became badly injured," Rally says.

The animal rights groups also issued a call to action.

The park cancelled all its orca shows Tuesday in "honor" of the deceased.