Where are Ethan and Tonya Couch?

There's probably no way 18-year-old Ethan Couch's mom is going to buy her fugitive son — or herself — out of trouble this time.

The Tarrant County Sheriff's Department says Tanya Couch, 48, is officially missing and may be with her son, Ethan Couch, who is wanted for violating probation. 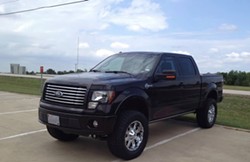 Ethan Couch killed four people while driving under the influence. His lawyers successfully convinced a judge that Ethan Couch "suffered" from a new condition called Affluenza, which only affects rich people. Basically, since Ethan Couch is loaded with cash and has dysfunctional parents he couldn't understand the difference between right and wrong. So, he was sentenced to 10 years probation.

While money can't buy happiness, it can keep the rich and famous out of prison — as long as they follow the rules.

"Anyone with information on the location of the truck or the whereabouts of Ethan Anthony Couch or Tonya Lynette Pope Couch please call 1-800-336-0102 for US Marshals or 817-884-1213," Anderson's message on Facebook says.