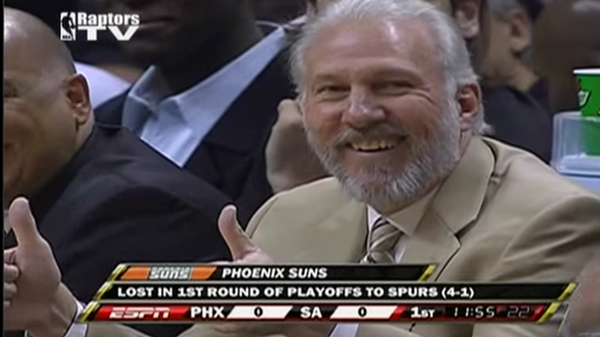 Yeah but really more like coach of the century, am I right?

Silver and Black-tinted glasses aside, winning the award is quite the honor for Popovich. This is the 16th time he has won Western Conference Coach of the Month, more than any other coach in NBA history, according to the Spurs.

Popovich led the Spurs to a 14-2 record in December. Their 14 victories included eight wins by 20 wins or more, topped by a 51-point destruction of the Philadelphia 76ers. The team's sole losses were to the Toronto Raptors on December 9 and to the Houston Rockets on Christmas. The Spurs still have not lost at home this season; their most recent home defeat was on March 12, 2015 to the Cleveland Cavaliers.

While many of the Spurs' December wins came against lesser competition, January promises to be more challenging. San Antonio's upcoming slate includes games against the Dallas Mavericks, Golden State Warriors, and two matchups with the Cavaliers before February.

To celebrate Pop's achievement, here's a compilation of some of his best off-court work: