If Voting Ended Today, No Spurs Would Start the NBA All-Star Game 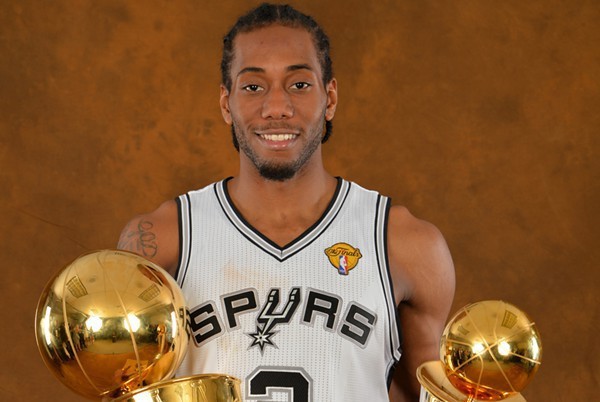 The NBA released its second round of results from fan voting for the 2016 All-Star Game. And the Spurs, despite holding the second-best record and the best point differential in the league, were skunked.

If voting ended today, no Spur would start the game.

Although the fan vote is a pure popularity contest — how else can you explain Kobe Bryant leading all vote-getters in his last and possibly worst year as a pro — it still counts. The top two guards and top three frontcourt players in the voting from each conference will start the game.

Spurs forward Kawhi Leonard is a lock to play in the game — somehow his first — but as voting currently stands he wouldn’t start the game. Leonard trails Golden State Warriors forward Draymond Green by 1,294 votes for the third place frontcourt spot.

Leonard is the only Spur who looks to have a real shot at starting the game. Tim Duncan is in seventh place in the frontcourt category with 228,995 votes, while LaMarcus Aldridge is in eleventh place with 124,404. Oklahoma City Thunder forward Kevin Durant would join Bryant and Green as the Western Conference’s third starting frontcourt player if the voting ended today.

Tony Parkers and Manu Ginobili are both in the top ten for Western Conference guards, but both would have to stage enormous rallies to start the game. Ginobili trails Oklahoma City Thunder guard Russell Westbrook, currently in second place, by 378,910 votes, and Parker lags by almost 400,000. No surprise that Golden State Warriors guard Stephen Curry leads the voting with 925,789 — more than Westbrook and third place guard Chris Paul combined.

Barring Leonard catching Green (which seems totally possible) or a crazy surge from one of the other players (not quite as likely), any Spur picked for the game will be selected by Western Conference coaches. Each conference’s coaches vote for seven reserve players for the game in addition to the five starters.