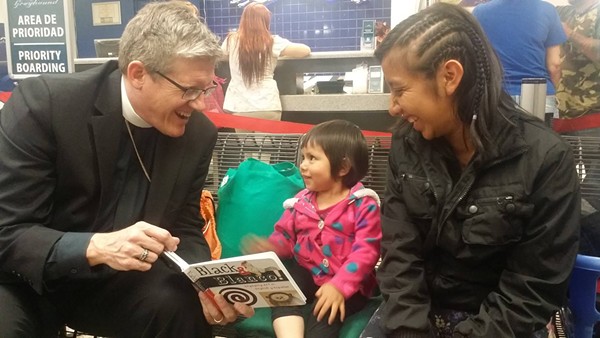 To ring in 2016 (and probably to rack up some tax dollar holiday overtime) Immigration and Customs Enforcement (ICE) agents in Dallas, Houston, Kansas City and Atlanta rounded up women and children who are seeking asylum to deport them.

Shortly after the ICE raids, the nonprofit Immigrant Center for Education and Legal Services (RAICES) alleged the feds failed to provide warrants and tricked families into leaving their homes, telling them they had no rights. On January 7, the nation's highest immigration court, the Board of Immigration Appeals in Falls Church, Virginia, stayed a handful of those deportations.

Now, the Southern Poverty Law Center tells the Huffington Post that it is investigating possible violations by ICE of the Fourth Amendment, which protects against illegal search and seizure.

"Our review of the cases suggests that ICE used tactics during the raids that potentially are illegal and violate the constitution and that in several of these cases it appears that proper consent was not obtained to enter the houses," SPLC attorney Eunice Cho told the HuffPost via email

ICE spokesman Bryan Cox told the media outlet that it doesn't discuss tactics, but in an email he disputed that agents in Georgia violated the law, telling the Huffington Post that the raid targets were based on final orders of removal from an immigration judge.

Earlier this month, Jonathan Ryan, RAICES executive director, said in a statement that these families have a right to legal counsel, and the the targets are refugees with legitimate asylum claims who will likely be killed if they return to gang-ravaged countries in Central America.

"As a law enforcement agency, ICE should understand what due process violations are, and should immediately cease these abusive tactics it is using in order to secure deportations,” Ryan said. “The mothers we have heard from were victims of fraudulent lawyers, they have legal rights in this country and, by ICE now violating those rights, they have even more legal options available to them.”