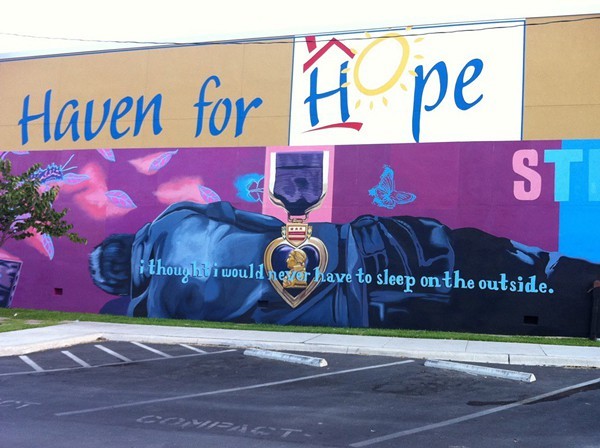 In addition to the regular security detail, off-duty San Antonio Police Department officers have patrolled Prospects Courtyard at Haven for Hope for the past couple months, according to spokeswoman Laura Calderon.

Calderon said the off-duty police were added to bring "a higher level of safety" and "more calm to the courtyard."

"The courtyard is a magnet for a criminal element. So people go in there and they’re trying to sell drugs, they're trying to get people into some kind of crime action. In order to have some control over that, we added the SAPD officers. It wasn't a single incident, it was the ongoing effort to make this a safer place," Calderon said.

Prospects Courtyard is an outdoor, covered cement slab where people can spend the night free of charge. Some homeless people refuse to sleep there, citing drug use, violence and theft. About 490 people sleep at the courtyard per night, though that figure sometimes surges to over 800 — particularly when it rains.

Some who sleep at the courtyard have "complained they don't feel safe," especially since Haven for Hope allows people who are inebriated or suffering from mental trauma to also stay there.

"They need to be safe as well," Calderon said. "What happens though is they can be a disruptive influence, so we have to be cognizant that there are other people in the courtyard who don't want to be around that type of behavior."

Calderon said the off-duty police working in the courtyard regularly patrol the area around Haven for Hope.

"They’re already familiar with the folks there," she said.