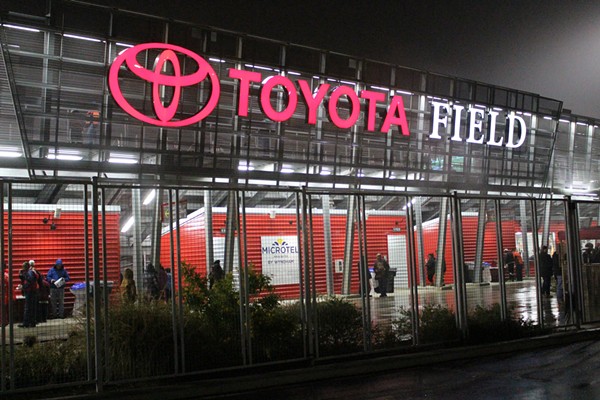 For the past few months, San Antonio's new soccer team has existed more as an amorphous idea than anything else. We knew a club would materialize eventually, but little beyond that.

But that's changing. With two months to go before the United Soccer League season kicks off, details about the new San Antonio club are emerging quickly. Today, the team announced its first signing: Carlos Alvarez, a 25-year-old midfielder who was once the second overall pick in the Major League Soccer SuperDraft.

Alvarez previously played for Chivas USA and the Colorado Rapids of the MLS. He spent last season on loan with the Charlotte Independence, another USL club. He spent his collegiate career at the University of Connecticut.

Later this week, we'll learn the name of the team Alvarez will play for. Spurs Sports and Entertainment (SSE), which owns the club, announced that they'll unveil the its name and crest at a public event at the AT&T Center on Thursday, February 4 at 7 p.m.

The SSE-owned team replaces the San Antonio Scorpions, which played in the North American Soccer League. The team will play at Toyota Field, which Scorpions owner Gordon Hartman sold to SSE, the City of San Antonio and Bexar County. Fielding a USL team, which is affiliated with MLS, is part of the group's long-term goal to bring Major League Soccer to San Antonio.

Watch an interview and highlights with Alvarez below: