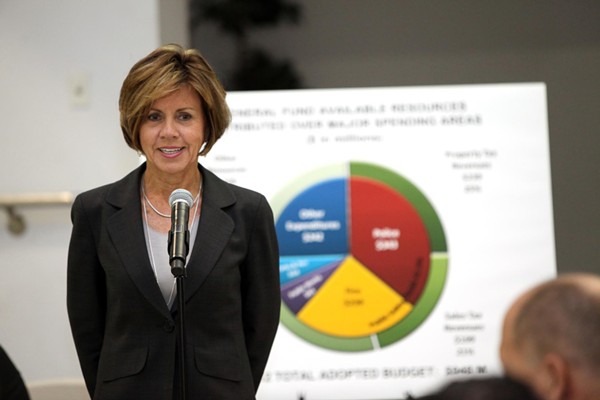 San Antonio City Council will soon decide whether to extend City Manager Sheryl Sculley's contract through 2018, and give her a series of raises that could make her the highest paid city manager in Texas.

City Council will discuss the new deal in a B Session today, and again in an A Session tomorrow. The contract amendment will likely be approved.

The City of San Antonio hadn't officially released any details about the new contract before today, although it was posted as an item near the bottom of the City Council agenda:

If Sculley is fired, she would receive her full salary for a year. Under the previous version of her contract, she would have been paid for 21 months.

This is the fifth time that Sculley's contract has been amended since she came to San Antonio from Phoenix in 2005. The new contract would make her the highest paid city manager in Texas, surpassing Dallas' A.C. Gonzalez, who makes $400,000 per year.

Before the B Session was even over, a show of support from Councilman Joe Krier hit inboxes, lauding Sculley and urging approval of the new contract.

"Barring any surprise revelations, I will support both [the contract extension and raise] because I believe San Antonio is a better, stronger city for having had her leadership over the last 10 years. Few city managers in the country have served as long as she has. And none can match her record of accomplishments and excellence," Krier said in the news release. "We are not paying the City Manager too much for her leadership skills, acumen, and many successes as well as the promise of more to come. She is appropriately compensated."

Click here to read the full amendment to Sculley's contract.