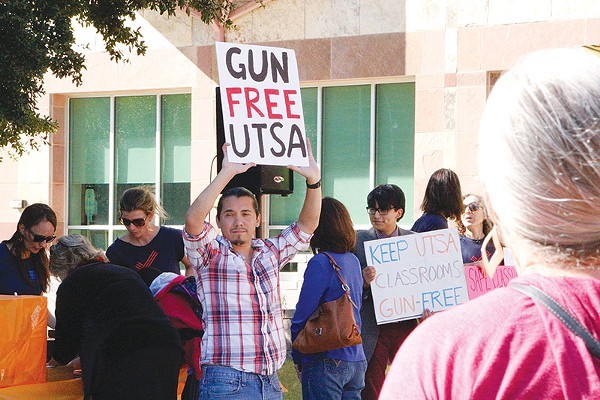 Senate Bill 11 — the campus carry bill passed during the 2015 legislative session — allows concealed handgun license holders to carry firearms on public universities in Texas starting on August 1, 2016. And that makes a majority of students at the University of Texas at San Antonio nervous for both their safety and for the future of their school, according to newly released results of a survey.

The survey, conducted by UTSA political science professors Walter Wilson and Bryan Gervais, was commissioned last fall. Most of its respondents indicated they felt less safe because of the new law, and that it would hinder their educational experience.

Students responded by a 2 to 1 margin that campus carry would make them feel less safe in every place except for academic offices, where a plurality of respondents still said they'd feel less safe.

The survey was sent to the entire UTSA student body, and 2,822 students participated. It had a margin of error of plus or minus 1.85 percent.