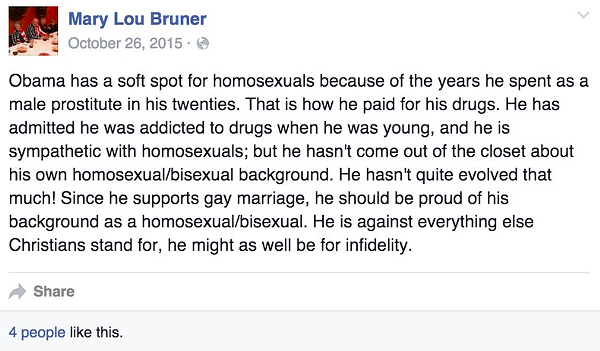 On Super Tuesday, Travis County residents elected a new Republican chairman named Robert Morrow who — by all appearances on social media — is a complete bigot asshole.

Heartless Hillary told druggie Bill Clinton to abandon a son he had with a black street hooker https://t.co/gQmLiEl8p9 #WhichHillary #tcot

Travis County can't do anything about it, either, until the next election.

Take Mary Lou Bruner, she has called President Barack Obama a gay prostitute and has suggested that children be taught Muslims are "the enemy." She demonstrated a propensity to be homophobic, racist and has  suggested that the North was the enemy during the Civil War, which had nothing to do with slavery.

Reflect on that last point because Bruner is in a runoff against Keven Ellis for a spot on the State Board of Education, which is the very same board that was embroiled in a controversy about how slavery was covered in new textbooks.

Thank goodness there's a chance to stop Bruner, unlike Morrow, in the runoff — though Travis County Republicans will probably find a way around Morrow.

However, sadly, the writing may be on the wall, as the Texas Tribune reports that Bruner is likely to win the seat, and if she does, get ready for more ridiculousness from the State Board of Education.