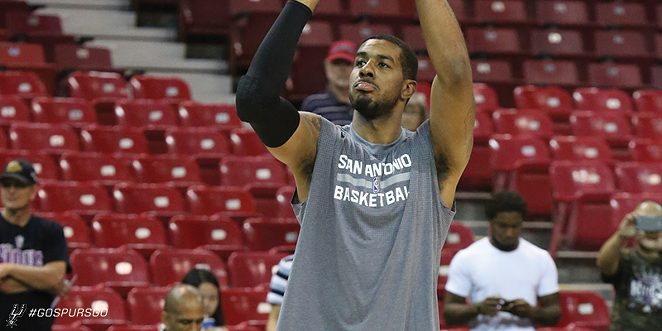 You could argue that Saturday's home tilt against the Golden State Warriors is the biggest regular season Spurs game ever. At the very least, it's the biggest so far this season. And boy, do ticket prices reflect that.

Saturday's game will pit the two best teams in basketball, two squads that are in the middle of historically great seasons. The Warriors are on pace to win 73 games this season, one better than the record-holding '95-'96 Chicago Bulls. And although the Spurs aren't blowing teams out at quite the rate they were earlier this season, still have a chance to break the single season point differential record.

Toss this in, too: The Warriors have won their last 50 home games, good enough for the all-time record. But if they slip up, the Spurs are positioned to usurp them. The Silver and Black has won 42 home games in a row dating back to last season, good enough for third-best all-time. Of course, any chance of catching the Warriors goes out the window if the team loses on Saturday.

So it's easy to see why this is a hot ticket — San Antonio in the middle of August hot. Right now on StubHub, the cheapest tickets are $139, and that's for standing room only. The most expensive seats will cost you a few paychecks: $7,436.57 (tax not included).

That's a pretty penny no matter how you slice it. But how does it stack up against other remaining Spurs games?

Throwing out the Spurs' other home game against the Warriors on April 10, the next-most expensive game to attend on average is Thursday's match against the Portland Trailblazers. This is probably impacted by how close we are to game time. But the cheapest tickets to see Damian Lillard and co. cost $88 a piece for balcony seats, whereas the most expensive available seats are $431.

Using ticket sites besides StubHub doesn't yield cheaper seats. The least-expensive seats from SeatGeek, which aggregates from multiple ticket-selling sites, cost $181. They're over $2,500 on the high end.

No matter where you buy tickets, getting into the AT&T Center will cost you this Saturday. Then again, these are two of the best teams in NBA history. And, evidently, watching them square off in person for 48 minutes is quite the commodity.