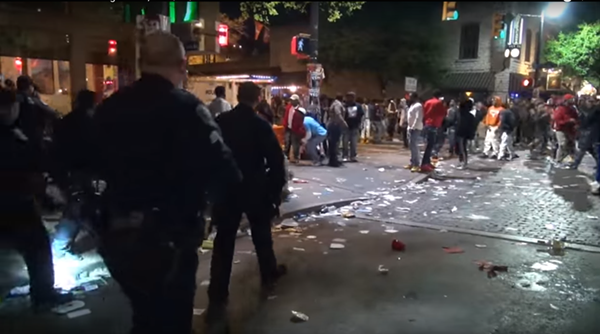 The Austin Police Department said the shots were fired at 6th and Trinity. There were no injuries and the suspect — who hasn't been identified in media reports yet — was arrested. The gun was recovered.

A YouTube video shows what appears to be a confrontation between two groups of people surrounded by a huge crowd of SXSW revelers.

As the two groups separate, the shots were fired, in the video it happens around the 1:38 mark, and the crowd disperses as people take cover.

Amazingly, whoever fired the shots, did so within close proximity to a bunch of Austin police officers who were closing in on the disturbance.

The man who filmed the video, YouTube user The Battousai, said at first police detained the wrong man, so he said he helped clear that guy and gave police the correct description of the man who fired the shots.

I was told that they did capture the gun man after I gave them the description. A person like this should have no business owning a gun. Firing into a crowd is reckless and this guy needed to be off the streets. Also APD had the wrong guy detained. I had a moral obligation to help clear him and give the correct description of the gunman.

In the first few seconds you can see that the guy in the blue & white jacket had a handgun in his front right pocket.