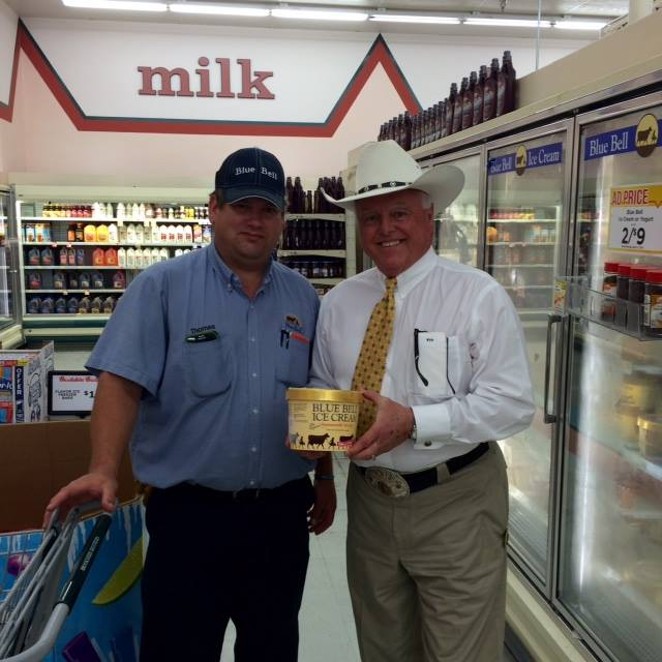 First, a few stories will trickle out through the press. Then a complaint is filed by groups like Texans for Public Justice or Progress Texas. And sometimes, grand juries hand down indictments. Then there will be the mugshot parade, and if you're former Texas Governor Rick Perry, that's followed by an ice cream outing.

While public corruption charges against Perry have been dropped, the state's new attorney general, Ken Paxton, still faces felony charges of securities fraud. And, of course, there's the slew of public corruption in South Texas, from San Antonio to the Rio Grande Valley.

Sid "Cupcake" Miller, the state's new agricultural commissioner, is under fire in the wake of a damning Houston Chronicle article that prompted Progress Texas to file a complaint with the Texas Rangers requesting an investigation into Miller's tax-funded trip to Oklahoma for a "Jesus Shot."

From the Houston Chronicle report:

Miller, a former rodeo cowboy who suffers from chronic pain, acknowledged to the Houston Chronicle that he has received the "Jesus Shot," a controversial but legal medication administered only by a single Oklahoma City-area doctor who claims that it takes away all pain for life.

Miller declined to confirm or deny whether he received the injection during the February 2015 trip.

That trip cost a little more than $1,000, and his Oklahoma excursion was billed as visit to the Oklahoma National Stockyards and for meetings with lawmakers and the Sooner State's top ag official, the Houston Chronicle reported, also noting that Miller — out of an abundance of caution — said he paid the bill back.

“Texas taxpayers should have never footed the bill for Sid Miller’s trip to get his 'Jesus Shot,'" Progress Texas Advocacy Director Lucy Stein says in a statement. “Sid Miller must be held accountable for abusing his office and using state funds as a personal piggy bank. No politician is above the law.”

Miller's already taken heat for handing out more bonuses to employees than his predecessor ever did while increasing agricultural fees. Later, the Houston Chronicle found out some of those bonuses violated department policy. The Texas Observer revealed he spent tens of thousands of dollars to make sure his office had a "Western" vibe. The agricultural commissioner has also suggested that Muslim refugees are like snakes and suggested dropping an atomic bomb on the Middle East to "make peace with the Muslim world." And this guy's first order of business as ag. commissioner was to make sure school kitchens could serve cupcakes and use deep fryers.

Anyway, he's bombastic and at the surface, he sure makes questionable decisions with public money. Read the complaint: