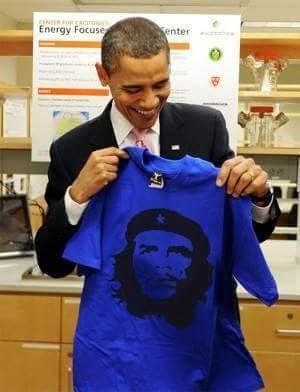 Texas Agriculture Commissioner Sid Miller posted a picture of President Barack Obama holding a Che Guevera T-shirt yesterday, chastising the president for traveling to Cuba and remaining there in the wake of the terror attacks in Brussels.

The problem is that the photograph isn't real. The iconic portrait of Guevera, a controversial figure whose image has been co-opted into a pop culture cornerstone, has been edited in.

The original photo is from a visit Obama paid to the Massachusetts Institute of Technology in in 2009 (click here to see it. The real shirt has a joke about high level math and the Old Testament, neither of which I understand particularly well).

On his trip to Cuba, Obama did pose for a photo in front of a Guevera mural. And he stayed in the country as the terror attacks in Belgium unfolded.

But the veracity of the picture didn't stop Miller from posting it, which aligns with his other Facebook behavior. This is the same pol who's compared Muslims to rattlesnakes and suggested dropping an atomic bomb on "the Muslim world."

He also may have used taxpayer funds to travel to Oklahoma for a cure-all "Jesus Shot." So perhaps the truthiness of his Facebook presence is the least of Miller's worries at the moment.