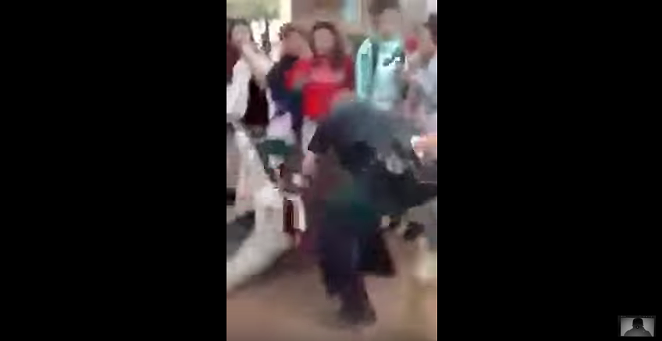 A female student at Rhodes Middle School was slammed to the ground by a San Antonio ISD officer, a video shows.

The incident occurred on Tuesday, March 29 as school was letting out. The district has launched an investigation, according to Leslie Price, executive director of communication for SAISD. The officer, who Price would not identify, has been placed on indefinite paid leave pending the result of the investigation.

"It’s very very concerning. We’ve moved quickly to launch a formal investigation both at the police and the administrative level," Price said. "We need to gather all the details, but also we will not tolerate excessive force in this district."

The video shows a girl being restrained by an officer, then slammed to the ground and carried off. The video is below:


Price said the district administration is still gathering details about the incident, but she said officials heard "it started with two students being verbally aggressive with each other after school."

Raul Valdez, the girl's father, said his daughter has a bump on her head and has suffered from headaches since the incident. Valdez said a friend of his daughter's shot the video.

“It hurt me really bad that a grown man could do that to a little girl. I want to confront the officer, but thought it would be better to do everything legally," Valdez said. “I want justice for my daughter. These police are getting out of hand. They think they are above the law."

Kiko Martinez contributed to this report.