Lone Star Rail District: The Project Is Not Dead 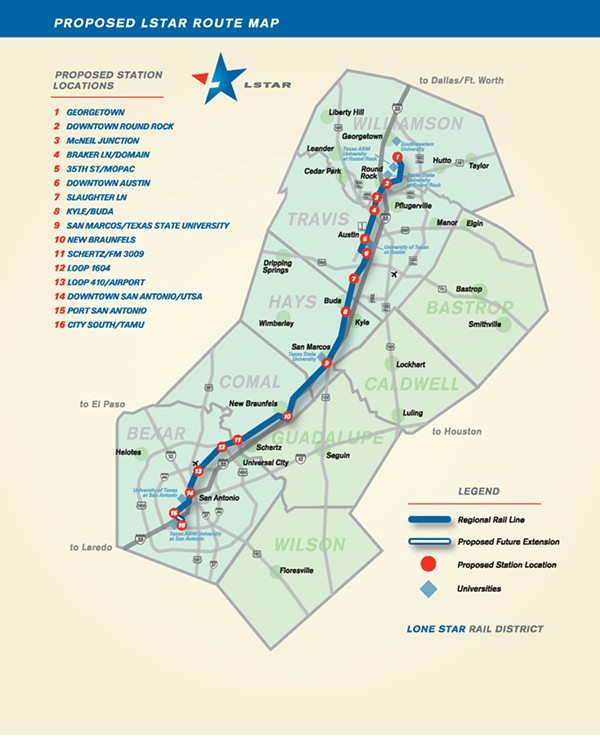 When news broke in early February that Union Pacific withdrew from a proposal to share freight rail tracks with the Lone Star Rail District to create a passenger line between congested San Antonio and Austin, politicians and media speculated the project was dead.

Not so, says Joe Black, rail director for the Lone Star Rail District.

"We do have viable options we are discussing with project partners," Black says. "The widespread panic that the project is dead is not true."

In March, the San Antonio Express-News reported that Mayor Ivy Taylor was calling on City Council to reconsider re-appropriating nearly $500,000 that had been set aside for the project. Bexar County has already done so.

Black says there will be a special meeting Friday at 10 a.m. in San Marcos at Dick's Classic Garage Car Museum & Event Center at 120 Stagecoach Trail where alternatives to the UP proposal will be presented.

"Sort of the overarching purpose of the meeting is to address misconceptions after the UP news came down. We want to correct those misconceptions," Black says. "We want to get our board members the correct info."

The same goes for the public and media, he says.

"Basically, we're going to show the options that are still under consideration for the project, the timelines and needs, and we're going to be doing a series of open houses about [those alternatives] that don't involve UP," Black says.

According to Black, changes during the planning process for large projects occur frequently. The news about UP is no different, he says.

"We just hadn't gotten to the point in the process where we were going to start presenting the alternatives," he explained.

Those alternatives will be presented Friday.