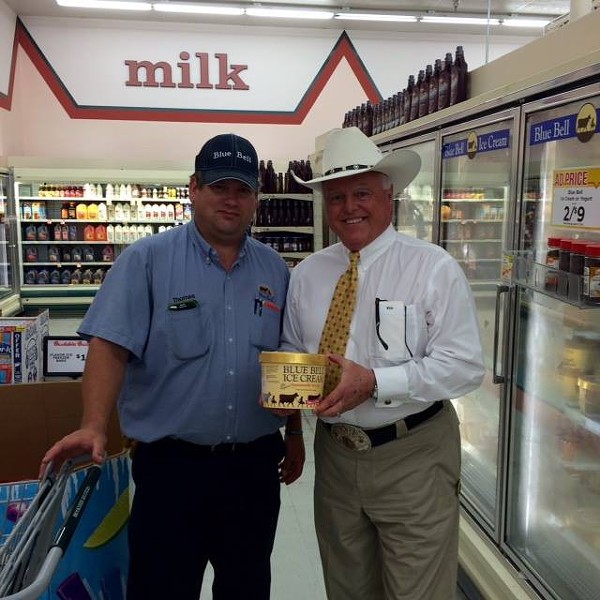 The Cupcake King is facing a criminal investigation.

Texas Agriculture Commissioner Sid Miller — whose first move as an elected official was to grant cupcakes amnesty — is now the target of a criminal investigation.

Miller is accused by the left-leaning group Progress Texas of misusing taxpayer money to fund a February 2015 trip to Oklahoma to get a "Jesus Shot," which supposedly takes all pain away.

“All the facts point to Sid Miller breaking the law,” Lucy Stein, Progress Texas advocacy director, says in a press release. “As a steward of the people’s money, Sid Miller must be held accountable for abusing his office. We are hopeful that the Texas Rangers will conduct a thorough and impartial investigation into Miller’s criminal conduct.”

The Houston Chronicle broke the story and last week the newspaper uncovered another trip — this time to Mississippi for some dang 'ol calf ropin' at a rodeo — where Miller used a combination of state money and campaign funds.

Miller has tried to cast the trips as state business, which has been shown to be a flat out lie.

Progress Texas has asked the Texas Rangers to investigate that trip as well.

Texas Ranger Captain J. Taylor confirmed there was a criminal investigation and said if any other violations are discovered during the investigation, they will be referred to the appropriate district attorney's office.

"Be advised, the Texas Rangers have initiated a criminal investigation against Texas Agriculture Commissioner Sidney Miller for the alleged offense of Abuse of Official Capacity," Taylor wrote in an email to Progress Texas. "A complete and thorough investigation will be conducted, and if during the course of the investigation additional criminal violations are discovered, a referral for criminal prosecution will be made to the appropriate district attorney's office."