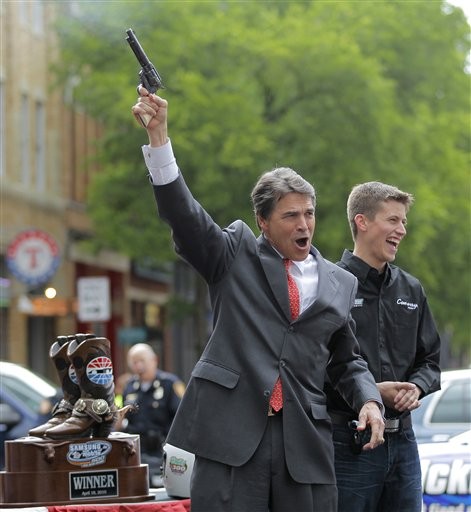 Texas' no longer indicted former governor, who famously couldn't name three government agencies he'd get rid of during his 2011 bid at the Republican nomination for president, might be angling himself back into the hot seat.

"I am not going to say no," Perry told CNN, which asked whether he'd consider being Trump's running mate, according to the Tribune report.

Boy, has the ice-cream eating, post-mugshot nut changed his tune.

Remember Trump's plan to make Mexico build a border wall? Perry had some thoughts on that, saying the New York City real estate mogul was out of touch on border security. After blasting the plan, Perry told us how he really feels.

"I have a message for my fellow Republicans and the independents who will be voting in the primary process: what Mr. Trump is offering is not conservatism, it is Trump-ism – a toxic mix of demagoguery and nonsense," Perry said in a statement last summer.

And then there's this gem: Trump is cancer.

"Let no one be mistaken – Donald Trump’s candidacy is a cancer on conservatism, and it must be clearly diagnosed, excised and discarded," Perry said during a July, 2015, speech in Washington D.C. "It cannot be pacified or ignored, for it will destroy a set of principles that has lifted more people out of poverty than any force in the history of the civilized world – the cause of conservatism."

There you have it, Perry is as full of as much shit as Trump is. Buckle your seatbelt, folks, the general election is going to be one hell of a ride.