A pre-dawn storm was soaking San Antonio and the long-anticipated groundbreaking ceremony for Confluence Park was just hours away.

But by 9 a.m., blue skies prevailed and the rain or shine show went on.

However, there couldn't have been a better way to usher in the era of Confluence Park than rain.

First conceived in 2007, Confluence Park will be an educational celebration of the substance that defines San Antonio: water.

"The San Antonio River Authority is able to reach a number of students each year, but there's no meeting place, no classroom, no facility that they can use to teach," says Estela Avery, San Antonio River Foundation Executive Director. "Confluence Park will fill that gap and so much more — it will be educational, recreational, functional — we've pursued a design that will allow the park to meet a number of needs and be capable of expansion as programs and opportunities grow."

The larger-than-life teaching tool's centerpiece will be a large pavilion made of formed concrete that funnels rainwater into a site-wide water catchment system. There will be three other pavilions around the park working as distinct gathering places. Any energy needed by the park will be generated through a solar array. And visitors will be able to learn about the diverse eco-types in and around the region.

After all, hundreds of millions of dollars have been spent to restore the San Antonio River over the years, there's a big reason the educational component is so important to the future.

Bexar County Judge Nelson Wolff, during remarks at the space, which used to be a former construction yard, said if people don't respect the animals and plants that have returned to the once derelict river, the progress that has been made will be forgotten. That's why education is key.

District 3 Councilwoman Rebecca Viagran, who represents the area on City Council, says she grew up — and still lives — around the area. Knowing what it used to be and used to look like makes preservation and restoration all the more important for visitors and residents alike.

"Confluence Park will be a first-of-its-kind, world class park, connecting our neighborhood, our river, our ecosystem and our heritage," Viagran said. "It is another chapter in the story of so many organizations working together to bring something beautiful and dynamic to the South Side and all of San Antonio."

Confluence Park is expected to open in 2017. 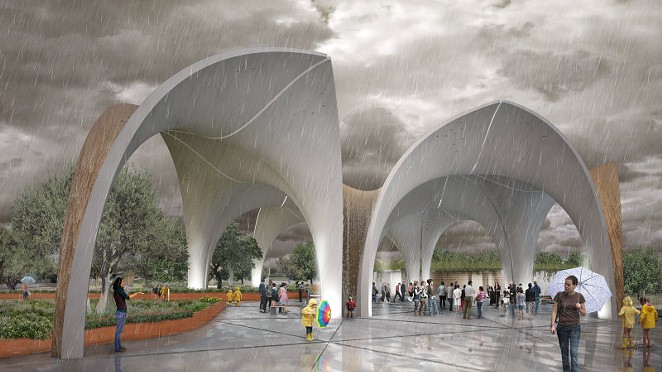