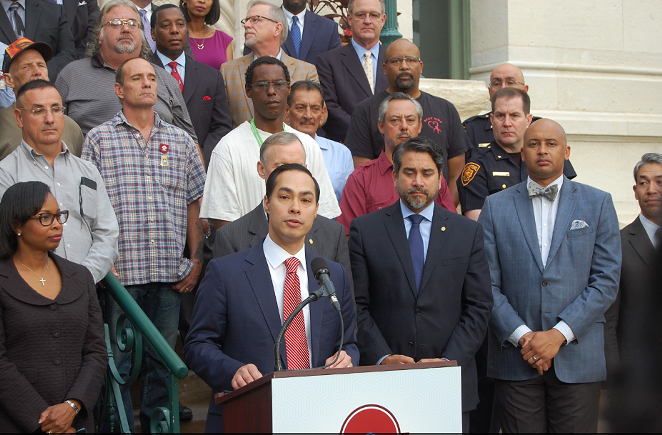 The benchmark doesn't mean that there are no homeless veterans on the street though. Instead, it indicates that "the infrastructure and systems ... ensure that any veteran experiencing a housing crisis in San Antonio will get the support they need to quickly obtain a permanent home," Matthew Doherty, executive director of the U.S. Interagency Council on Homelessness, said to Taylor in a letter.

Taylor said that over 1,300 homeless veterans had been moved into permanent housing, including 123 who were chronically homeless. But she also stressed that hitting this mark represented "a milestone rather than the completion of an initiative."

The array of people at the press conference was a visual reminder of the collaborative nature of the process. Taylor was flanked by her predecessor, Secretary of Housing and Urban Development Julian Castro, and members of City Council. Behind them stood formerly homeless veterans, non-profit executives, members of the San Antonio Police Department's IMPACT teams, and City of San Antonio staff.

The effort was accelerated by a $2 million grant by local financial services giant USAA. The money was used to lease homes for veterans, and hire additional navigators who help direct veterans to various services.

Reducing homelessness, particularly among veterans, has been a priority for the Obama administration. Castro said that veteran homelessness fell by 36 percent nationwide between 2010 and 2015.

First Lady Michelle Obama officially challenged mayors across the nation to end veteran homelessness in their communities during the summer of 2014. San Antonio now joins Philadelphia, New Orleans and Houston as major cities to meet the objective.

Seth Jarmon, a formerly homeless veteran who's now an outreach manager for Support Services for Veteran Families, said that the milestone felt personal to him. In addition to being homeless, Jarmon had also spent time in prison.

"I have rapport with those people, because that's me," Jarmon said. "I give them some food, some water, let them know that somebody cares about them."

The City had set a deadline of ending veteran homelessness by March 31. The City submitted the paperwork to USICH by that date, and has since been going through a "negotiation" with the agency, explaining the city's system of care.

Watch a video below of a brief interview with Shane Browning, a formerly homeless veteran who was housed in March through Family Endeavors, one of the main groups involved in the effort: