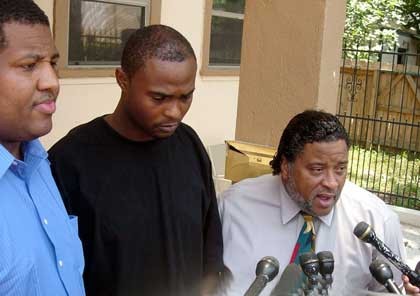 Update 6:45 p.m.: This story was updated with additional information regarding the City's response.

James Myart, a bombastic former San Antonio civil rights attorney, is suing several local officials and police officers for $5 million, claiming that he was beaten and denied medical attention while in police custody, and that elected officials and City staff have "perpetuated and condoned, for years, the illegal use of force against black and brown persons by City of San Antonio law enforcement officials."

Myart named the following city officials in the lawsuit:

Myart claims that on April 26 of this year, he was "severely brutalized, beaten," at the Magistrate Detention Center, and that law enforcement "refused to provide adequate medical care" to him. He also claims that a similar occurrence happened in February of 2015.

Myart said that the April beating was caught on tape. When asked if he had a copy of it, Myart said he didn't have it on him, but that it was "as bad as the Rodney King tape." He said that after the beating, he immediately went to Dr. Leo Edwards for treatment, who concluded that Myart "should have been taken to the hospital," according to the court filing.

Edwards was reached over the phone, but refused to answer any questions.

"Most of the detention officers who dealt with Mr. Myart did so with restraint and professionalism. They handled themselves well in what was a difficult situation.

However, while trying to escort Mr. Myart into a cell, one detention officer lifted the handles on Mr. Myart’s wheelchair causing him to fall to the ground.

We have fired the detention officer. This is not the standard of care or professionalism that we expect from the City’s employees."

The fired employee was Adam Stalker, one of the officers named in Myart's suit.

SAPD officials declined to comment for this story, since it involves pending litigation.

The filing's allegations against City officials claim that through their supervisory roles, they've failed to "properly train and supervise" law enforcement officers "in proper use of force." Myart states that the officials' actions have resulted in "illegal use of force and excessive [sic] have become a pattern and practice of the Defendants and the City of San Antonio."

In addition to the $5 million stemming from damages related to the alleged beating, Myart also requested that his court and medical costs be covered.

Myart is representing himself in the case, even though his license to practice law was revoked in 2008 after he pleaded guilty to stealing more than $13,000 from the founder of the Texas Mexican Mafia, Heriberto Huerta.

In July of 2015, he was charged with deadly conduct and criminal mischief after "brandishing a knife" at an East Side woman, according to the San Antonio Express-News. The case was dismissed.

Myart is known for his outlandish style and bluster. And he's long been a harsh critic of law enforcement, particularly during McManus' tenure.