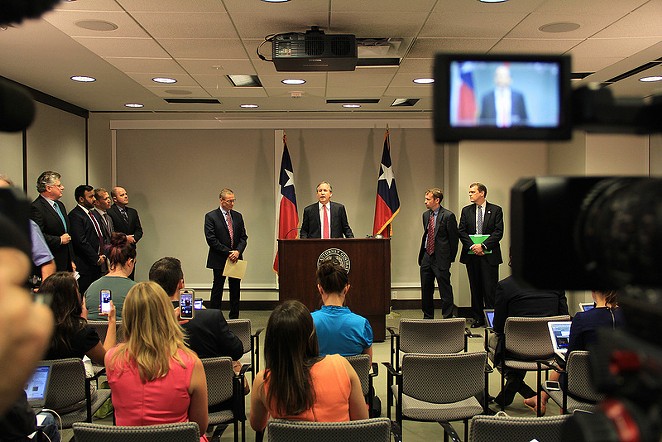 A tiny fraction of people in the United States are transgender.

Yet, Texas Attorney General Ken Paxton, along with 10 other states, are suing the U.S. Department of Education, the U.S. Department of Justice and other federal agencies and officials because the administration told school districts in Texas that Title IX allows transgender people to use the bathroom that corresponds with their gender identity. If school districts that take federal monies restrict that civil right, President Barack Obama's administration could withhold funding.

And so, big bad Obama's out to take away the divine right to bathrooms from cis Texans everywhere. Not only that, women and children must now pee in fear of sexual predators dressed as women preying on them in the dark bathroom night.

“Our local schools are now in the crosshairs of the Obama Administration, which maintains it will punish those schools who do not comply with its orders. These schools are facing the potential loss of school funding for simply following common sense policies that protect their students,” Paxton said.

We don't think he means transgender students, either.

“This represents just the latest example of the current administration’s attempts to accomplish by executive fiat what they couldn’t accomplish through the democratic process in Congress," Paxton says. "By forcing through his policies by executive action, President Obama excluded the voice of the people. We stand today to ensure those voices are heard.”

The cis voices, though. Other voices don't count.

The lawsuit insultingly labels Title IX protections for transgender people as an experiment.

"Defendants have conspired to turn workplaces and educational settings across the country into laboratories for a massive social experiment, flouting the democratic process, and running roughshod over commonsense policies protecting children and basic privacy rights," the lawsuit states.

But, hey, Paxton is in the news again after filing yet another lawsuit. That's got to be a win for him, because, today, at least people aren't talking about the civil and criminal securities fraud charges hanging over his head.

However, as James Esseks, director of the ACLU Lesbian Gay Bisexual Transgender and HIV Project notes, this lawsuit is not harmless.

“This lawsuit is an attack from eleven states on transgender Americans, plain and simple," Esseks says. "While the Obama administration is being sued, the real targets here are vulnerable young people and adults who simply seek to live their lives free from discrimination when they go to school, work or the restroom.”