AG Paxton Tries to Silence Whistleblower, Stumbles Into Yet Another Scandal 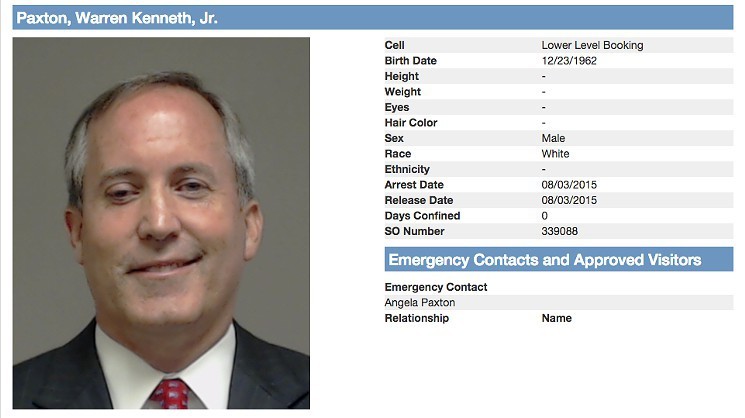 Texas Attorney General Ken Paxton’s maiden voyage in statewide office has been a rocky one, punctuated by felony securities fraud charges and a lawsuit filed against him by the U.S. Securities and Exchange Commission.

And on Friday, Texas’ scandal-prone top lawyer waded into yet another controversy, this time trying to silence a whistleblower who claims the AG’s office under Paxton’s predecessor, now-Gov. Greg Abbott, quietly dropped a multi million dollar fraud case against Trump University for political reasons.

This week, John Owens, deputy director of the AG’s consumer protection division under Abbott, told multiple media outlets that top brass at the AG’s office inexplicably killed the investigation into Trump’s defunct real estate training program, an investigation that concluded that Trump U had engaged in “false, misleading and deceptive practices” in Texas.

Rather than filing a lawsuit or pressuring Trump U to pay back the millions of dollars Texans spent on what the investigation called “dubious real estate investment strategies,” the AG’s office under Abbott dropped the case and Trump U quietly left the state. Years later, Donald Trump would donate some $35,000 to Abbott’s successful gubernatorial campaign, according to the AP.

“The decision not to sue [Trump] was political,” Owens told the Dallas Morning News’ Lauren McGaughy. “Had [Trump] not been involved in politics to the extent he was at the time, we would have gotten approval. Had he been just some other scam artist, we would have sued him.”

It’s still unclear exactly why the case against Trump U wasn’t pursued or who ultimately made the final call to nix any lawsuit against or settlement with the company. Abbott’s office has denied that Trump’s donation to his campaign had anything to do with the decision. And on Friday a deputy attorney general under his watch named David Morales fell on the sword, telling reporters in a prepared statement that he’d personally made the decision to drop the case and hadn’t even discussed it with Abbott before making the call.

Still, as Owens points out, even if Morales is telling the truth, that doesn’t necessarily absolve Abbott in the whole Trump U mess. “If he says he made the decision and then informed Abbott and [Daniel Hodge, then-first assistant attorney general], then I can’t dispute it,” he told the News on Friday. “But, they could have reversed him easily. The decision to leave Texas consumers high and dry was effectively made by the entire administration, including Abbott.” Curiously enough, the AP has reported that Florida Attorney General Pam Bondi similarly backed out of a lawsuit against Trump U that her office had considered joining not long before the Donald J. Trump Foundation donated $25,000 to a political fundraising committee that supported her own re-election bid.

Regardless of who made the final call, there’s the lingering question of why Texas would let Trump U quietly leave the state without consequence, even after an AG’s investigation determined it had scammed Texas taxpayers out of millions of dollars with a real estate scheme other state attorneys general have called “straight-up fraud.”

Still, none of it happened on Paxton’s watch. Perhaps he could have even steered clear of this one and just focused on the criminal charges against him that an appeals court refused to toss this week.