Brace Yourselves: Donald Trump Is Coming to San Antonio Next Week 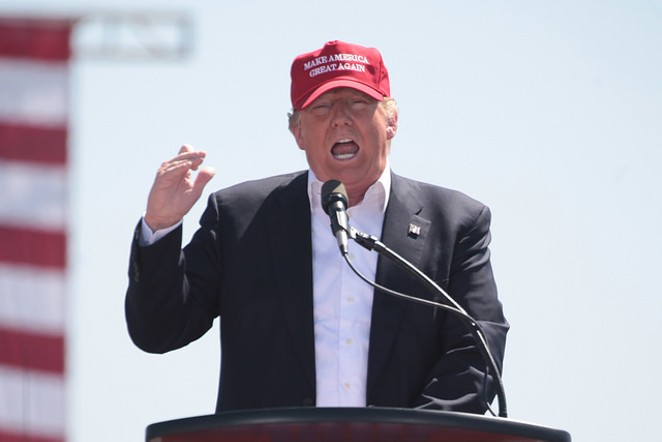 Presumptive Republican nominee Donald Trump will stop in San Antonio next week as part of a three-city Texas tour.

Trump will come to San Antonio and Houston on Friday, June 17, according to the Dallas Morning News. He’ll be in Dallas the day before. All three stops will include fundraisers, according to the Associated Press, and it's unclear if he'll appear publicly. Neither the Trump campaign nor the Bexar County Republican Party responded to requests for comment.

Trump’s trip to the Alamo City coincides with the state’s biannual Democratic Convention. A page organizing a protest of Trump's arrival in San Antonio has already popped up on Facebook. Violence has popped up around many Trump rallies, and the event’s description urges participants to remain peaceful.

The news comes on the same day that Rep. Filemon Vela, a Brownsville Democrat, wrote an open letter to Trump, blasting the businessman for his anti-Hispanic rhetoric and his plan to build a wall along the southern border. The letter is more than 900 words long, but its thesis could be summed up in the final sentence:

“Mr. Trump, you’re a racist and you can take your border wall and shove it up

Vela’s 34th District stretches from just south of Seguin to Brownsville. Before telling Trump exactly where to put his wall idea — a cornerstone of the Republican’s campaign — he chastised him for “bigoted” language toward Hispanics.

Vela’s remarks come on the heels of Trump suggesting that District Court Judge Gonzalo Curiel of California, who’s presiding over a lawsuit against the much-maligned Trump University, is biased against Trump because Curiel “is a Mexican.”

“He’s a Mexican. We’re building a wall between here and Mexico," Trump said in an interview with CNN. "The answer is, he is giving us very unfair rulings, rulings that people can’t even believe.”

Trump has not responded to Vela’s letter.