After Storms, Untreated Sewage Spills Onto Trails and Into Creek 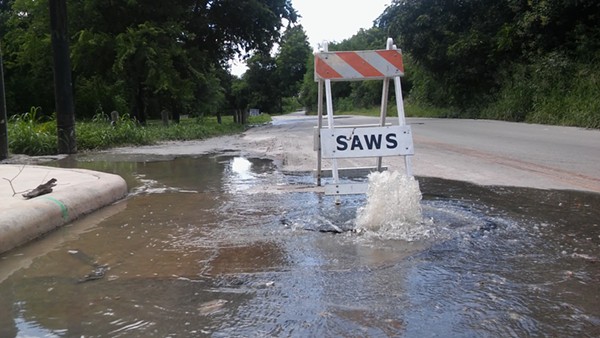 Thousands of gallons of sewage-contaminated water on the Northeast Side burbled out of manholes, over a public hike and bike trail and into Salado Creek over the past few days — a sight that’s become common for people who live nearby.

The problem stem from sewer lines under Holbrook Road, which runs parallel to Salado Creek near Fort Sam Houston. Heavy rains last week flooded the 42-inch pipes, forcing stormwater and sewage up to the surface.

The manholes stopped overflowing sometime between Sunday evening and Monday morning, but not before more than 100,000 gallons of sewage-contaminated water flowed out of them. On Sunday afternoon, more than 50 gallons of water flowed out of each manhole every minute. The untreated sewage within it contained dangerous, polluting pathogens.
The brownish-grey water gurgled out of several manholes along the road, matting down grass and creating small fetid bogs by the road. Part of the Salado Creek Greenway trail, a popular hike and bike route, sits between the road and the creek.

Even though pools of sewage water formed along the trail, plenty of hikers and bikers were still on the trail. Most turned around when they saw signs from San Antonio Water System in English and Spanish explaining that the water contained sewage and was dangerous, but some bikers sped right through the water.

“Signage is posted along the trails, however; there are many access points throughout the miles of trails. Trail Stewards are also assigned across City trails to advise residents of conditions,” Martinez said in a written statement.
The smell from the spill is pungent, and detectable for over a mile along the creek. Diane Goldsmith, who’s lived on Holbrook Road since 1991, said that the scent lingers on her car long after she’s driven through it.

“I’m just glad I don’t live down there,” said Goldsmith, whose house is a few blocks away from the overflowing manholes. “Meanwhile, all that [sewage] is polluting Salado Creek.”

Goldsmith used to wade and fish in the creek, but hasn't done so in years. She said she got an infection from the water during the 1998 floods after she was exposed to it while helping a neighbor move their horses to safer ground.

Anne Hayden, a communications manager for SAWS, said that the utility plans to solve the problem by replacing six miles of 42-inch pipe with 72-inch pipe. But that project won’t start until 2017. It will take at least 18 months to complete and cost $50 million.

Goldsmith said she'd believe it when she sees it. Until then, she's concerned about the fish in the creek and the people on the trails.

"You've got all these hikers and bikers and joggers," Goldsmith said. "But I wouldn't go in there."