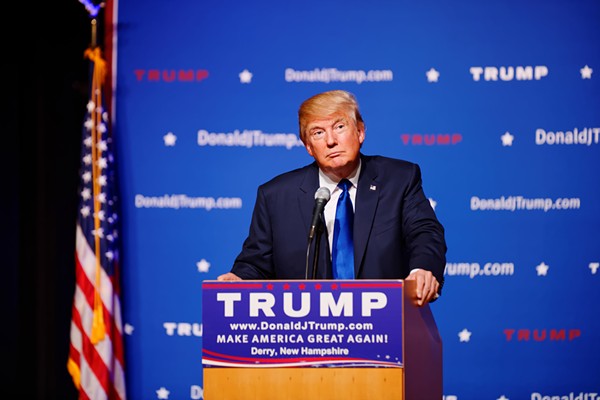 The pricey, invitation-only Donald Trump fundraiser in San Antonio will take place at the Oak Hills Country Club on Friday, June 17 according to media reports.

The lowest donation level listed on the ticket to the event is $500, according to the San Antonio Express-News. But that just gets you into a luncheon — as it goes in the political fundraising game, bigger donations yield bigger prizes, and a $250,000 contribution (dubbed the "Champion's Circle") entitles a couple to 10 tickets to the luncheon, and four tickets for a photo op and meet-and-greet. The event starts at noon.

Real estate developer Gene Powell, who's also chaired the University of Texas Board of Regents and is deeply involved in the forthcoming Alamo master plan, will host the fundraiser with Dennis Nixon, president and CEO of International Bank of Commerce in Laredo, KSAT reported. Powell and Nixon are the Texas chairs for Trump Victory, a fundraising arm for the presumptive Republican nominee.

The event's location, Oak Hills Country Club, is a private club near the Medical Center. It's far from The Alamodome, where the Texas Democratic Party will be holding its biannual state convention. The fundraiser does not appear on Trump's official schedule.

Plans for Trump protests began to pop up quickly after news of his plans to come to San Antonio broke. An organizational meeting for the protest will take place Thursday, June 9 at 6 p.m. at the Southwest Workers Union (1416 E. Commerce St.), according to the "Dump Trump San Antonio!" Facebook page.