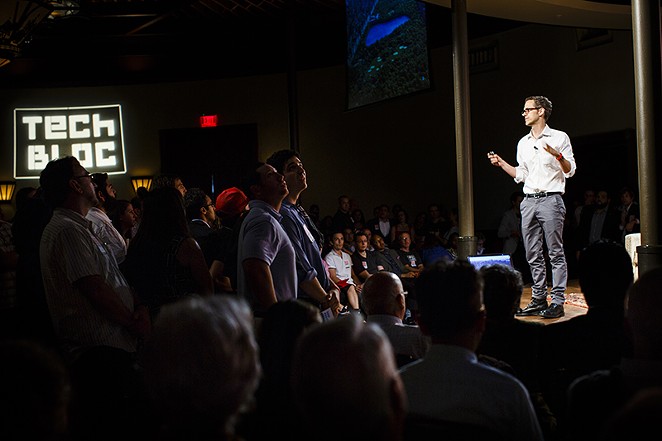 As Tech Bloc marks its one-year anniversary on Thursday afternoon at the Pearl Stables, co-founder David Heard says the grassroots organization will announce an initiative that aims to help bridge San Antonio's digital divide — the disparity in access to technology and the Internet between rich and poor communities.

"The digital divide is one thing, but there are other issues, like education," Heard said. "How do we create situations in which we can model for [kids in poor communities] the kinds of lives and careers they have every ability to achieve, but they are not aspiring to because they don't see it as something they can access?"

For San Antonio to truly become a tech-hub, it must tap into those underserved communities, he said.

"San Antonio is one of the top cities for millennials but they’re not aspiring in great numbers to join the tech workforce and that's largely because in some of the underserved neighborhoods, they see jobs in tech as careers for other people. It’s not something they can be a part of and the reality is they can and they should," Heard said.

Outside of saying the initiative will include longtime, large San Antonio employers, Heard would only speak in generalities.

In 2015, Tech Bloc's most notable impact was how it lobbied city leaders to sit back down at the table with Uber and Lyft, which had stopped operating in San Antonio when City Council passed regulations that required fingerprint background checks for drivers.

"Rideshare was emblematic of the kinds of things that needed to change to be friendlier to startup creation and high-tech growth," Heard said, explaining that the conflict created a sense that emerging technologies weren't welcome here, along with the people who use them.

According to a May 2016 Pew Research Center report, the vast majority of rideshare users are young. The median age of riders is 33, with nearly 30 percent of 18 to 29-year-olds using these services. Heard said recruiters at tech companies are aware of stats like this, which is why he says it was important that San Antonio resolved its conflict with Uber and Lyft.

Still, one year out, attracting and retaining tech workers is still a challenge in the Alamo City, says Heard.

Part of the equation is increasing homegrown talent, but it also means attracting people from other markets and keeping professionals and businesses in San Antonio.

"The most prosperous economies in the world going forward are going to be the ones that grow and attract and attain young talent," Heard said. "We need to be a community that is a lifestyle choice for tech workers so they look at San Antonio as a relevant place to consider working."

Tech Bloc co-founder Lew Moorman says to accomplish this, San Antonio's boosters, like the San Antonio Economic Development Foundation, need to move away from luring more $12-an-hour call center jobs to town and attract innovators instead. But it's also about retaining tech workers who have already moved here.

"This is not just about getting startups. Think about USAA, one of our most important companies in this city. They announced they are going to do some work downtown, but they also opened an office in Austin ... because they can't get the talent they want here," Moorman said. "Rackspace has been adding jobs in other cities aggressively. San Antonio has to be able to meet the demand or we are going to be at risk."

At City Council on Thursday, policy makers will vote on whether to allocate $800,000 — $200,000 a year for four years — to the Techstars Talent Retention Pilot Program, which aims to keep graduates of the Techstars Cloud program in San Antonio.

Starting in 2012, the Techstars Cloud program, which is used to lure tech entrepreneurs to San Antonio, has helped develop 44 companies. Just eight, or 18 percent, of those startups chose to stay or relocate to the Alamo City.

Companies apply to the Techstars Cloud program, which then provides startup money and mentors who help accelerate growth in exchange for stock. In San Antonio, Techstars is headquartered at Geekdom.

"Unfortunately, they’ve had 44 graduates and only eight of those graduates since 2012 have actually stayed in San Antonio," Garcia said. "So we’re trying to move that up to 16 through this program."

Tech Bloc would partner with the city and manage the program.

"It's certainly something we're proud of. The funds will be used for getting well vetted, high-quality startups to stay here. But I don't think we're at critical mass," Moorman said. "I think that's part of building a vibrant ecosystem. It's a good test and we're excited to have the opportunity to try."