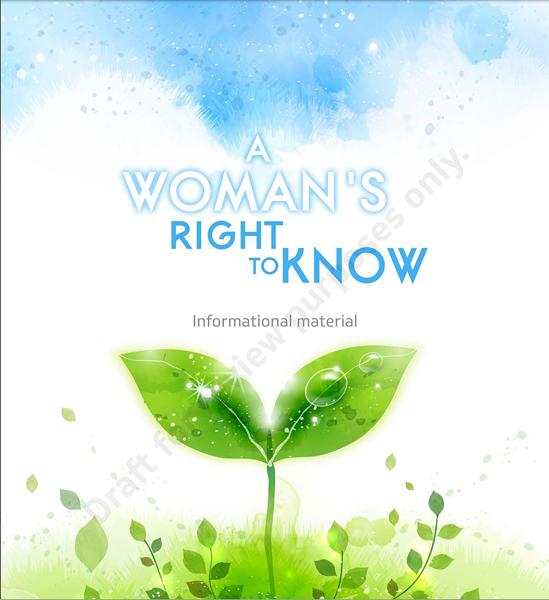 It took until 2016 for the U.S. Supreme Court to rule that judges should actually have to consider science and research and experts when determining whether state regulations on abortion present an unconstitutional burden on a woman’s right to choose.

However, the restrictions knocked down by the High Court ruling aren't the only provisions in Texas law that force abortion providers to do or say things that, according to medical experts, have little to no basis in actual science and medicine.

Take, for instance, the information booklet that doctors are forced by law to give to women seeking abortion called “A Woman’s Right to Know.” Created in 2003 as part of the state’s so-called “informed consent” law, the pamphlet has come under fire by reproductive rights advocates, doctors and even state lawmakers who call it an error-filled vehicle of official state misinformation.

And this month the Texas Department of State Health Services could add the list of unscientific info abortion providers are forced to give their patients. Currently up for review are tweaks to the booklet that would add mentions of so-called “fetal pain” and passages that, rather than using the typical medical language of fetus or embryo, talk to women about their “unborn child” and “your baby” when explaining gestation, even at as early as four weeks.

State lawmakers have for years tried to pass reforms that would regulate what the state health department could put into the pre-abortion pamphlet. In 2013, State Rep. Sarah Davis, a Houston-area Republican, sponsored a bill that would have removed a section that says studies show “an increased risk of developing breast cancer after an abortion,” a notion that has long been discredited by the National Cancer Institute. That measure failed, as did a 2015 bill calling for the booklet to contain information deemed “medically accurate, objective, and complete by the National Institutes of Health and affiliated organizations.”

The changes proposed by DSHS this year would, among other things, add this particular line on fetal pain that pretty flatly conflicts with research on the matter: “We know that babies develop the ability to feel pain while in the womb. In consideration of the potential for fetal pain, Texas law currently limits abortion to under 20 weeks.” As the Austin Chronicle reported earlier this week, progressive groups like NARAL Pro-Choice Texas, the Texas Equal Access Fund and Progress Texas have already sent DSHS officials a letter outlining what they call numerous inaccuracies in the pamphlet and calling for a public hearing on the issue. DSHS closes the public comment period on the latest changes to the booklet on July 29.

DSHS says you email comments to WRTK@dshs.state.tx.us; the groups involved in protesting the changes have created a draft letter for people opposing the pamphlet's language to sign and send here.