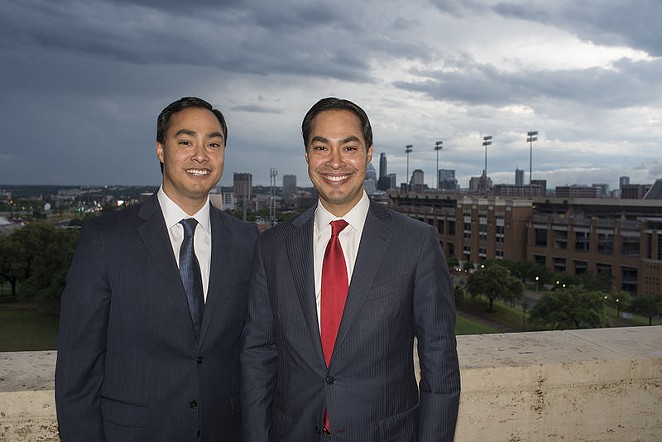 Texas Democrats didn't waste any time Sunday in calling for one of the Castro brothers to replace Democratic National Committee Chairwoman Debbie Wasserman Schultz, who resigned following an embarrassing leak of emails that showed she was biased against Bernie Sanders' campaign.

Wasserman Schultz stepped down Sunday, a day before the Democratic National Convention kicked off in Philadelphia. Late last week, Wikileaks released more than 20,000 DNC emails that revealed how Wasserman Schultz and other high-ranking party officials were making fun of Sanders and criticizing his campaign.

The same day she resigned, Texas Democratic Party Chair Gilberto Hinojosa said that the DNC should choose its first Hispanic chair in either Julián or Joaquin Castro. “In our humble opinion, Texas Democrats believe that both Julian and Joaquin Castro have what it takes to pick up the reins and move the party forward. It would be remarkable to have the first Hispanic Chair of the Democratic National Committee,” Hinojosa said in a statement.

Julián Castro is currently the secretary of the Department of Housing and Urban Development. While he was frequently mentioned as a possible running mate for Hillary Clinton, the presumptive Democratic presidential nominee passed him over and chose Virginia Senator Tim Kaine instead. Congressman Joaquin Castro represents Texas in Washington D.C. and both men are seen as possible challengers to U.S. Senator Ted Cruz, who is up for re-election in 2018.