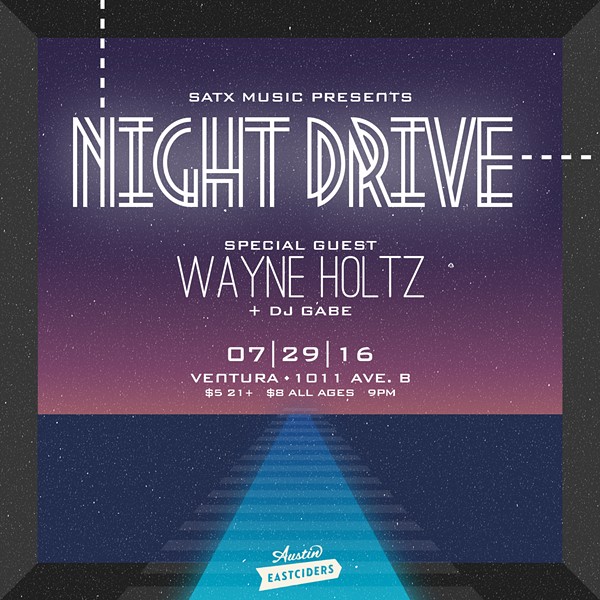 If you're still sad about the 1011 closing and were looking for an occasion to christen the new Ventura, look no further than the nocturnal stylings of Austin's own Night Drive in their coming performance this Friday.

Self-described as 'future wave,' a pop genre at the intersection of dance beats and the dark side of human emotion, Night Drive has opened for CHVRCHES, YACHT, and several other bands that forgot to turn off caps lock. For the past three years, they've been making music inspired by the dense landscapes of sci-fi cinema that recalls the neon and leather of a slick Nicolas Winding Refn film.

You might've caught them at ACL last year or at Float Fest two weekends ago, tearin' it up during the day. Building on their local hype, Night Drive is also scheduled to play the quasi-Fun Fun Fun Fest resurrection Sound on Sound Fest in Austin this November.

The entire night of performances will be bookended by sets from DJ Gabe Garza, of Deep South Collective and Southtown Vinyl. Also supporting Night Drive is local theatrical-pop artist Wayne H0ltz, who will perform over beats produced and staged by fellow San Antonian Bobby Rivas (of Islands & Tigers).

Check out the FB event for more updates as the show gets closer.