Could Texas' Anti-LGBT Politicians Screw San Antonio Out of the NCAA Final Four? 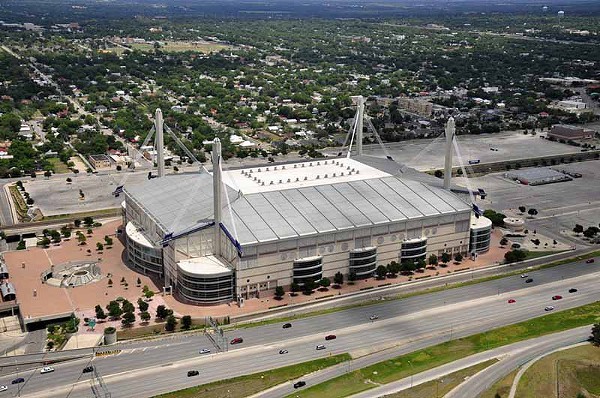 A few months ago, the NCAA announced that it wouldn't reward cities and states that passed anti-LGBT laws with revenue-generating championships.

The significant policy change was a response to North Carolina Gov. Pat McCrory, who in March signed a bill that repealed an ordinance that offered protections to the transgender community in Charlotte — an ordinance that said people can use whatever bathroom corresponds with their gender identity. The bill McCrory signed then overturned the policy and also prevented any city or local government in North Carolina from passing any such local non-discrimination laws.

That doesn't mean that San Antonio won't be required to prove to the NCAA that its policies don't discriminate and provide "an environment that is safe, healthy, and free of discrimination, plus safeguards the dignity of everyone involved in the event." Last week, the NCAA announced it was sending questionnaires to all cities interested in hosting future NCAA championships but it's also sending one to San Antonio, along with other currently awarded host sites, as first reported by the San Antonio Business Journal.

Mayor Ivy Taylor office didn't respond to our request for comment on whether the mayor, who voted against the non-discrimination ordinance in 2013, thinks the city's rule will pass that bar. “The NCAA recently sent an anti-discrimination questionnaire to the San Antonio Local Organizing Committee (of which the City is a member). We will work with SALOC on our response," Taylor said in a statement. "In the meantime, I do believe the mission of our City’s Non-Discrimination Ordinance, which is overseen by the Office of Diversity and Inclusion, directly aligns with the NCAA’s commitment to anti-discrimination.” However, it likely will. In basic terms, the NCAA wants to know whether a community even has a non-discrimination ordinance, whether it regulates bathrooms or locker rooms, and whether it has provisions that allow for the refusal of accommodations or services to any person.

Where it's going to get hairy for San Antonio is that the questionnaire also wants to know whether state law clashes with the NCAA's new criteria.

Enter Lt. Gov. Dan Patrick, who was a vocal opponent of Houston's non-discrimination ordinance, which anti-LGBT activists succeeded in overturning last year. Patrick thinks North Carolina's bill is terrific and over the past few months has increasingly attacked efforts to protect transgender people and the LGBT community at-large from discrimination.

In May, Patrick said Fort Worth ISD Superintendent Kent Scribner should resign after the district approved a policy meant to protect transgender students from discrimination. Part of that policy included speaking to a student if a teacher found out they were transgender instead of outing the kids to their possibly non-supportive parents. Patrick called on Texas Attorney General Ken Paxton to rule on whether Fort Worth ISD's policy violates the law. Not surprisingly, Paxton's non-binding legal opinion concluded that the policy violates Texas' education code, prompting the district to amend the policy to involve parents if a child is questioning their gender identity.

Patrick has also joined Paxton in vehemently opposing the Department of Education and President Barack Obama's directive to school districts to let transgender students use the restroom or locker room that corresponds with their gender identity. Under the new directive, school districts that don't have transgender-affirming policies risk losing federal education funding.

Paxton spearheaded a lawsuit with 12 other states against the Obama administration over the directive, a move Patrick obviously supports. "It will disrupt schools across Texas, creating potentially embarrassing and unsafe situations for girls who would be forced, under his order, to share bathrooms, locker rooms and showers with boys," Patrick said the time. The federal directive came after the Department of Justice sued North Carolina over its previously mentioned bathroom law.

So when it comes to the NCAA's assessment of San Antonio, the question remains: Could conservative lawmakers jeopardize San Antonio's role in hosting the Final Four if, as promised, they pass laws that discriminate against the trans community and repeal local NDOs, like San Antonio's, when they head back to the legislature in January?

If so, and if the NCAA stands by its new policy, the Alamo City could run afoul of the NCAA's requirement that cities provide "an environment that is safe, healthy, and free of discrimination" — not because of local leaders, but due state politics. Such an outcome would be particularly awkward for a city that's investing $50 million into renovations at the Alamodome to host the Final Four, which is expected to generate millions of dollars in local revenue.

Story updated at 9:20 a.m. to include comment from Mayor Ivy Taylor.