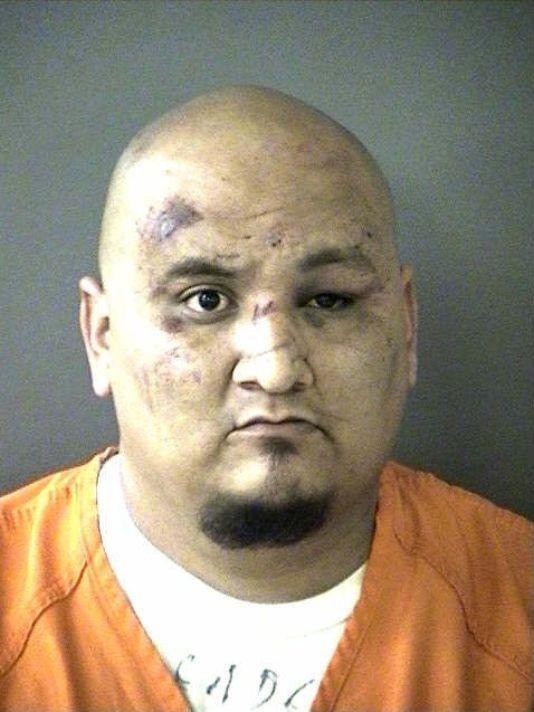 A convicted Texas Mexican Mafia hitman is looking at life in prison for killing four fellow gang members and ordering a hit on a fifth gang member who doubled as a Balcones Heights police officer.

Ruben Reyes, 38, a "Lieutenant of Lieutenants" who went by the nickname "Menace," pleaded guilty Thursday afternoon to five counts of firing a gun in retaliation to a violent crime and five counts of murder in the aid of racketeering. According to the San Antonio Express-News, Reyes admitted to killing 11 other people, but prosecutors told the paper they only charged him with the murders they were sure they could prove.

It was Reyes' own words that provided federal authorities with the evidence they needed to put him behind bars for the killings. He started talking to authorities after he ended up on the other side of a gun. On November 9, 2014, four unknown men knocked on Reyes' door. When he answered, they all opened fire, according to the federal criminal complaint against Reyes. He was hit once in the back and taken to the hospital. A few days later, Reyes called the San Antonio Police Department and told police about the attempt on his life. He then began providing information about multiple unsolved murders in San Antonio and led police to a grave in Pearsall where he buried three of his victims.

The murders prosecutors have pegged to Reyes began in October 2013 and continued through May 2014 when Balcones Heights police officer Julian Pesina was found shot to death outside of his tattoo parlor, Notorious Ink Tattoo and Piercing Studio. While Reyes didn't pull the trigger, he did order Texas Mexican Mafia members Jesse Santibanez, 26, Jerry Idrogo, 34, and Alfredo Cardona, 36, to kill Pesina.

According to the United States Attorneys Office, Pesina claimed membership to the gang, was selling drugs and paying the "dime," which is a street tax the gang collects, when Texas Mexican Mafia leadership found out Pesina was a police officer. It didn't matter to the gang that Pesina was crooked. On May 4, 2014, Reyes ordered Idrogo to arrange to pick up the street tax from Pesina. The men agreed to meet in front of Pesina's tattoo shop. Before arriving, Idrogo dropped Santibanez and Cardona off on the side of the building. When Pesina walked up to Idrogo and paid the street tax, Santibanez and Cardona shot and killed him, according to a 2015 USAO press release. Santibanez, Idrogo and Cardona face life in prison.

Reyes' apparent rise in the gang, however, started in late 2013 when he killed a fellow gang member to improve his standing in the Texas Mexican Mafia. On October 12, 2013, Reyes murdered Ulysses Farias in front of the man's family, according to prosecutors. They say Reyes, along with another gang member named Jerry Moreno, executed Farias because gang leadership believed Farias was speaking to federal agents. (Farias apparently violated gang rules by bringing his wife along with him when he went to collect the "dime" from drug dealers.)

By January 2014, Reyes moved on from killing drug dealers and lower level gang members to targeting Texas Mexican Mafia leadership in San Antonio. According to the federal criminal complaint, the Texas Mexican Mafia wanted "Captain" Mark Anthony Bernal, also known as "Lefty," "General" Carlos Chapa, who went by "Worm," and "Lieutenant of Lieutenants" Johnny Solis, aka "Smiley," killed for mishandling $60,000 and bad management of daily gang operations. Police had even warned Bernal in December 2013 that his gang was going to try to kill him, according to the criminal complaint.

On January 13, 2014, Reyes lured all three of them into traps and killed them, court records show. Reyes arranged to have Chapa meet him at Southpark Mall. He told Chapa they were heading out to meet another gang member. Reyes, who was driving a stolen Ford F150 pickup truck, told Chapa to get in the back seat. While driving on the frontage road of Interstate 35, Reyes turned around and shot Chapa multiple times. Reyes covered Chapa's body in insulation and metal that was in the truck and drove him to a pre-dug grave in Pearsall, according to the complaint against Reyes.

Later that day, Reyes told Bernal to meet him and another gang member at a bar. He told Reyes they needed to go collect money on the South Side. Reyes and the other gang member had Bernal drive them to a South Side neighborhood in Bernal's Mercury Cougar. When they got near the house to "collect the money," he had Bernal pull over to the curb. Then Reyes shot him several times, killing him. Bernal also ended up in that grave in Pearsall.

Solis would be the last to die that day. After returning from Pearsall, Reyes called Solis and told him to meet him on the East Side of San Antonio where he needed help breaking into a home to collect a drug debt. When Reyes got into the passenger seat of Solis' Chevrolet 1500 pickup, Reyes shot the man multiple times, killing him. Solis' fate ended in the same place as Bernal and Chapa's — a grave in Pearsall.

Reyes is scheduled for sentencing September 2.