How We Created a Downtown Hotel Mess 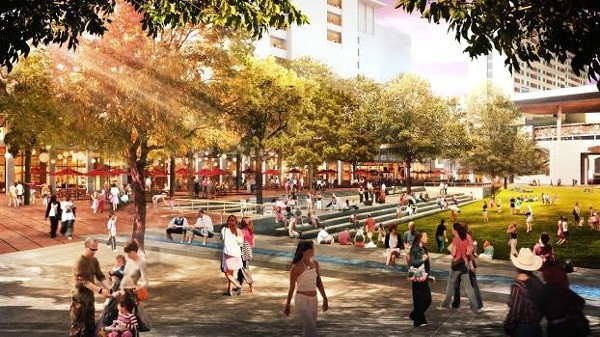 It’s a great time to be in the hotel business. In April, Smith Travel Research, the country’s leading hotel research firm, could report “74 months of continued growth” in national hotel demand, with business easily surpassing pre-recession levels. Major city markets have been setting records in terms of hotel occupancy and average rate.

But not in downtown San Antonio.

How is it that the downtown hotels still haven’t recovered, when most of the rest of the nation is seeing a booming hotel business? Much of the reason lies with the continuing development of new downtown hotels. We’ve seen lots and lots of new downtown hotels over the last few years, with a total of 9,384 hotel rooms in downtown’s 78205 Zipcode in 2007 growing to 11,442 at the end of 2015. And there are even more hotels coming.

Perhaps the city’s own policymaking is the biggest reason downtown hotels are still lagging.

Take the case of the 1,003-room city-financed and backed Grand Hyatt. A long string of city officials since the 1980s had argued that San Antonio desperately needed a big new convention center hotel, contending that a new 1,000 room hotel would produce a boom in convention business. One after another, proposals for a privately-built hotel, even with what late Express-News columnist Carlos Guerra regularly called the “mother of all hotel giveaways,” flopped.

So, in 2004, Mayor Ed Garza and the city council decided to pursue a city-financed hotel, backed by citywide hotel tax revenues. The promise was that the Grand Hyatt would propel a boom in business at the Henry B. Gonzalez Convention Center. Then-CVB head Melvin Tennant argued that the city had a host of “lost opportunities from lack of convention center hotel,” and that a big new hotel “maximizes the success of the Convention Center and the overall destination.” And right there on page 8-10 of the May 2004 report from consultant HVS International were the totals for the city’s overall convention business (including both the center and hotels) over the previous few years, from 707,379 hotel room nights in 1993 to 724,882 room nights in 1998, and finally 709,081 in 2003.

The HVS consultants provided a very specific forecast of exactly how much the new Grand Hyatt would boost the city’s convention business: 150,000 new room nights each year, with an additional 30,000 just at the Hyatt. Added to the city’s previous convention demand, that should have brought the total of convention-related hotel room nights to almost 900,000 annually. So what happened?

In 2014, San Antonio attracted conventions and meetings that produced a total of 725,333 room nights. The 2015 total proved a bit better, at 773,569—just a little above where we were in the mid- and late-1990s, before the last convention center expansion and before the Grand Hyatt. Simply put, the promises and forecasts that promoted the Grand Hyatt haven’t been realized. The promotional spin of the CVB was just spin.

With no real boost in our overall convention business, the boom in downtown hotels has produced a flop—a downtown hotel market that is overbuilt. So, you might ask, shouldn’t those responsible be held accountable? Well, Melvin Tennant of the CVB is long gone, now heading the comparable convention bureau in Minneapolis and promoting the idea that a big new convention center hotel will boost the business in that city. Mayor Ed Garza? Long since out of office, along with his city council colleagues. That’s what happens in San Antonio when public policies don’t work.

And the HVS consultants? Well, they told a host of other cities, including Phoenix, Baltimore, Chicago, Atlanta, Portland, Ft. Lauderdale and Dallas, that they too needed a big new convention center hotel, feeding even more convention competition for San Antonio.

If there is no real accountability, what should we do as a community? At the very least, we need a clear public recognition of yet another public policy failure. And we need to stop making it worse. Providing more public subsidies for more downtown hotels, as the city council recently did for developer Chris Hill’s proposed Hilton Canopy Hotel on Commerce Street, is the last thing our city council should be doing. We succeeded in building a downtown filled with underperforming hotels, so we simply need to stop.

Then, we need to think carefully about the plans to privatize our convention and visitors bureau. The CVB bears a significant portion of the responsibility for where we find ourselves. Year after year, the promise was that spending more on hotel subsidies and development together with successive convention center expansions was the route to convention success. It hasn’t been. We deserve better answers, different CVB leadership, and a better way.