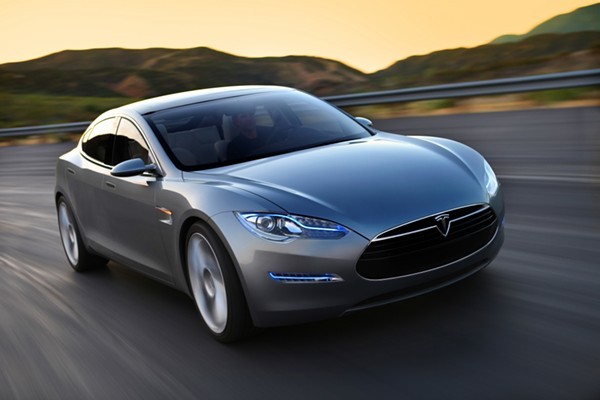 For the past couple years, Tesla Motors and San Antonio have been like two shy kids at a high school dance. There have been some attempts to foster a relationship, like when Tesla courted city officials in 2014 over a proposal to build an electric-battery factory here (Reno, Nevada, ended up getting it). The company has also made two attempts at opening showrooms for its electric vehicles here, both of which fizzled.

But on Thursday afternoon, San Antonio City Council rezoned a Ducati motorcycle dealership on the far northwest side to allow for the sale of cars. Not mentioned in the agenda item was the fact that a real estate deal involving Tesla Motors was being negotiated behind the scenes.

Councilman Ron Nirenberg, who represents the area, says that the property's current owner, San Antonio tech businessman David Monroe, is negotiating a sale with local real estate firm Concord Properties, which is working with Tesla Motors, to turn the location into an electric car showroom for the company.

Tesla Motors, which is owned by Elon Musk, co-founder of Paypal and CEO and founder of SpaceX, cannot sell cars directly to consumers in Texas. Here in the Lone Star State, consumers have to purchase vehicles from auto dealers. Buyer's aren't allowed to go straight to the manufacturer. So if you want to buy a Tesla vehicle here, you have to order it online or travel to another state to buy one.

This is Musk's third attempt at opening up a showroom in San Antonio. In early 2015, the company tried to open up at Sonterra Boulevard and 1604, but for reasons unknown, they abandoned that effort, Nirenberg explained. Last summer, despite burdensome San Antonio Water System regulations, Tesla tried to open a showroom at Interstate 10 and 1604. According to a San Antonio Express-News article about Tesla's latest effort, those plans were abandoned because of concerns about the impact car batteries could have on the Edwards Aquifer. "Then they held a pop-up in La Cantera to some success," Nirenberg said.

Currently, all of Texas' major cities except for San Antonio have a Tesla showroom. Austin has one, the Dallas/Fort Worth area has three and Houston has two locations. As the company continues to build its presence in Texas, it's also lobbying state officials to change the law to allow consumers to buy directly from dealers. At the Texas GOP convention this year, Tesla received a boon when the party voted to add a plank to its 2016 platform that called for the direct sale of motor vehicles.

Albeit a small win, it's still a victory for a company that has been tangling with the Texas Legislature since 2013 when House Bill 3351, which would have exempted the sale of electric vehicles from the auto dealership law, failed to make it to a vote. In 2015, Tesla tried again, but to no avail, the Texas Tribune reported.

Lobbyists for Tesla and for auto dealership organizations in the state both pumped millions into fighting each other. Still, since 2013, Tesla has grown its presence in the state and continues that effort with its latest attempt to gain a toehold in San Antonio.