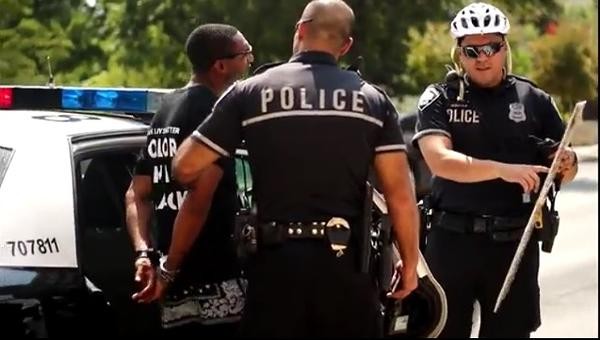 While negotiations between the union and mayor’s office reportedly centered around healthcare costs, wages and a 10-year evergreen clause that the city, in a lawsuit filed in against the union two years ago, called unconstitutional, local activists calling for greater police accountability have questioned why reforms related to police oversight and officer discipline went nowhere.

“This is a police contract that’s basically void of accountability,” said local activist Mike Lowe, who was arrested by San Antonio police during a protest last year for, among other things, waiving a sign that said, “Fuck the Police.”

Lowe criticizes the mayor’s office for failing to even get the union to agree to the low-hanging fruit of police reform: revising the department’s disciplinary policies so that officer misconduct isn’t swept under the rug after enough time has passed.

As it stands, department officials and arbitrators hearing a case of officer misconduct don’t always get to hear an officer’s full disciplinary history when deciding what punishment to give. Here’s how it currently works: arbitrators and officials can’t consider any drug- or alcohol-related violations more than 10 years old; infractions involving “intentional violence” only follow a cop for five years; any other disciplinary action only show up for two years. If you were suspended for three days or less, the department automatically lowers your suspension to a “written reprimand.”

Lowe and other activists plan to protest outside City Hall this Wednesday at 5 p.m., before council’s citizens-to-be-heard session, where they're organizing people to sign up and speak. Last week the mayor’s office and union announced that some 70 percent of union members approved the negotiated contract, meaning the agreement will soon head to city council for final approval.

Local activists aren’t the only ones saying an agreement without any police reforms would be a missed opportunity. In fact, councilman Rey Saldaña has become increasingly vocal about his opposition to the contract for that very reason.

Late last month Express-News columnist Gilbert Garcia first reported on emails between Saldaña and Taylor in which the south side councilman explains why he can’t support the current deal. Saldaña told the mayor he’d spent time on police ride-alongs and with community members on the city's east side trying to gain a nuanced understanding of the issue. “Each of the experiences left me with a question,” he wrote. “What, if anything, can policy makers do to calm tensions and prevent a situation at home? We may not be able to change what’s in people’s hearts, but we can change what’s in our contract and hold our department accountable to higher standards.”

“Changing the language in the agreement to reflect transparent, truthful records is something both good officers and minority communities can agree with,” Saldaña told the Current last week. Saldaña says he didn’t even think it controversial when the idea of changing the language was floated before the city went into court-ordered contract negotiations with the union. The idea, he says, is a no-brainer: an officer’s full disciplinary history should matter when the department weighs how to punish someone for misconduct.

Taylor, for her part, says she’s not opposed to such reforms, but that they were a nonstarter when her office brought them up during contract negotiations with the union. She also referenced the recent killing of police officers in Dallas and Louisiana, saying now is not the appropriate time to discuss these kinds of reforms—or, as she put it, “that heightened the sense in my mind that now is not the time for the community and police to be at odds.”

Taylor insisted reforms can still be tackled outside the contract negotiation process, like expanding the city’s community policing program, better recruiting to ensure the city’s police force is reflective of the community’s makeup, and hosting public hearings about police reform. She also told us this: “I wanna drive home the fact that while I believe his (Saldana’s) concerns are valid, and I appreciate that he’s most recently come to recognize that these are challenges that some of us have been working on for a little bit longer, we have to be realistic as to what some of the practical solutions are.”

Saldaña, of course, worries these are the kinds of changes that can only happen when the union has been forced to sit at the bargaining table. “I think this is the only time to have that conversation,” he told us. “Otherwise, everyone can come to a consensus, leave the room, and say they’ll tackle it in five years when the contract is up for review again.”