The Bexar County Jail Will Soon Only Do Video Visitation 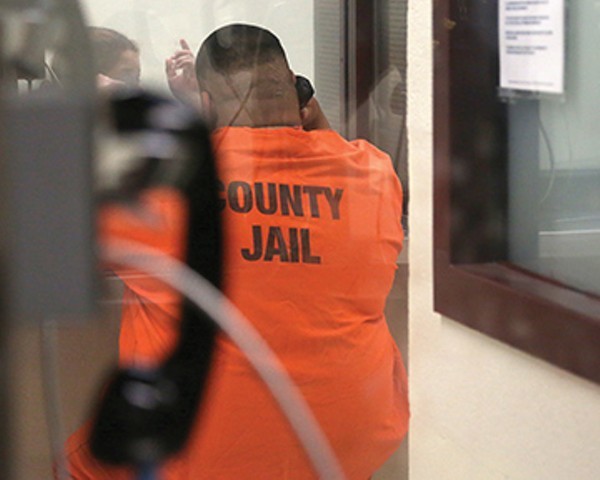 The days of visiting loved ones in jail where all that separates an inmate and a family member is a pane of plexiglass are quickly coming to an end in Bexar County.

The Bexar County jail's new policy of only allowing for video visitation begins at the beginning of September. In July 2015, Bexar County Commissioners Court approved approximately $6 million to pay ICSolutions, the jail's phone service provider, to install video-visitation technology and to finish up construction on a re-entry facility where people will now speak to their loved ones via a live link connected to housing pods in the jail. The re-entry facility will also provide services to people transitioning out of jail that aim to reduce recidivism. According to the San Antonio Express-News, it will cost $760,000 annually to operate the program.

While video-only visitation will be the blanket policy at the jail, Bexar County Sheriff's Office spokeswoman Rosanne Hughes said authorities will consider face-to-face visits on a case-by-case basis. "And we also will continue our contact visitation program MATCH (Mothers and Their Children), which is 30 years old, and PATCH (Papas And Their Children), which is almost that old," Hughes said via email. "Those visits take place twice a month for inmates who qualify and are selected."

However, Bexar County was barely even able to implement this new policy because in 2015, the Texas Legislature passed House Bill 549, which requires jails to provide inmates two 20-minute in-person visits per week. An amendment tacked onto the bill excluded jails that have already spent money on transitioning to video visitation or jails under construction that don't have in-person visitation capabilities. Bexar County successfully lobbied for an exemption because at the time of the bill's passage, it had already spent $470,000 on planning and architectural design. So it was grandfathered out of the rule.

While nothing can really be done at this point to change the policy, there was plenty of opposition to it leading up to the Commissioners Court's July 2015 vote. Diane Claitor, executive director of the Texas Jail Project, an inmate advocacy organization, said last July that face-to-face visitation shouldn't have been eliminated for a couple reasons — and certainly not just because Bexar County decided to spend millions on video-visitation technology.

"One is that most people, or a lot of people, don't relate as well to a video image, especially children. It's very important for children to be able to see their parents and know they're OK," she said. Secondly, Claitor insists the technology can be glitchy and says she's seen instances across Texas where sound and images are shaky and where visits are cut short because of system failures.

Bexar County Sheriff Susan Pamerleau had pitched the technology by saying that it would reduce long lines at the jail and actually provide more opportunities for visitation. "We're going to expand from five days a week to seven days a week, 10 hours a day for video visitation," Pamerleau said at the time. "People can make online appointments and show up 15 minutes before. How is that not better?" Her other reason for pushing for video-only visitation is that she thinks it will make her guards safer because, in her experience, staff is most vulnerable to attack after an inmate has an emotional visit.