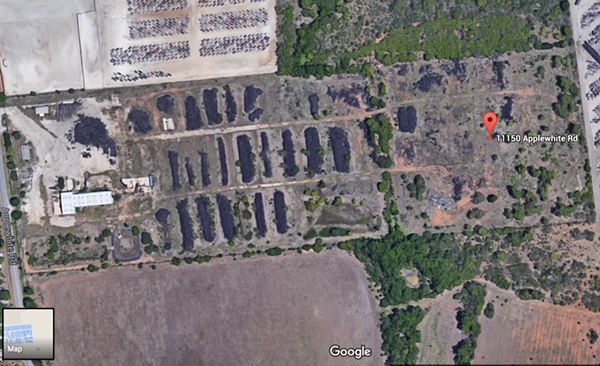 This week Texas Attorney General Ken Paxton filed the state's third lawsuit in 16 years against a tire dump on the south side that officials say would burn for 9 months straight if it were to ever catch fire.

The 36-acre tract of land called Applewhite Safe Tire, which is currently operated by Eclipse Renewables, is overgrown, infested with swarms of mosquitoes that breed in standing water at the site, and has an estimated 1 million-plus tire scraps onsite.

Eclipse Renewables bought the site in 2009 and doesn't have a Texas Commission on Environmental Equality permit to store scrap tires. It's been in violation of several TCEQ rules since at least April 2015, when investigators first started visiting the site after residents complained about swarms of mosquitoes, according to the lawsuit. The litigation seeks to stop Eclipse from storing any new tires at the site, to clean up the site and remove tires to a facility with a permit and could result in fines in excess of $1 million.

State Representative John Lujan said the site, which is within one-half mile of 100 residences and five businesses, is a danger to the community. "It has been a priority of mine to bring more attention to this issue because the potential fire hazard and health concerns presented by the abandoned tires is very serious," Lujan said. "I hope the owners will take responsibility for this mess and begin the process of cleaning up the site." Lujan, who used to be a firefighter, once put out a fire at the site. In July, he sent a letter to TCEQ urging it to take action.

This site has been a problem since ever since the Safe Tire Disposal Corporation's permit to store tires expired years ago. "Safe Tire abandoned operations at the Facility, leaving behind an estimated four million scrap tires," according to the complaint. The state sued in 2002 and a court ordered Safe Tire Disposal Corporation to clean up the site, which never happened. In 2008, the state sued again. The outcome was the same. Safe Tire was ordered to clean up the mess it left behind and the company did not clean it up. The following year Eclipse bought the facility. "Eclipse does not have now, nor did it ever have, a permit or registration from the TCEQ for the Facility to be used as a tire storage site or a tire processor site," according to the AG's office.

Investigators visited the site at least four more times in 2015 and 2016, culminating in two back-to-back visits this April. The situation remained unchanged as the investigator "observed overgrown vegetation, ponding water and swarms of mosquitoes present at the Facility. He also observed the presence of an estimated one million scrap tire units on the ground at the Facility."

Aside from a possible 10-digit fine, Eclipse must also cut the grass, remove the brush and kill mosquitoes, which is of particular importance considering very real fears that Texas could be the next state where Zika is locally transmitted. The legal maneuver will also stop Eclipse from moving new tires to the facility and require the company to remove three tons of tires within 180 days of a judge signing off on the order.