Van de Putte Endorses Taylor in Mayor's Race. Which Is ... Kind of Awkward 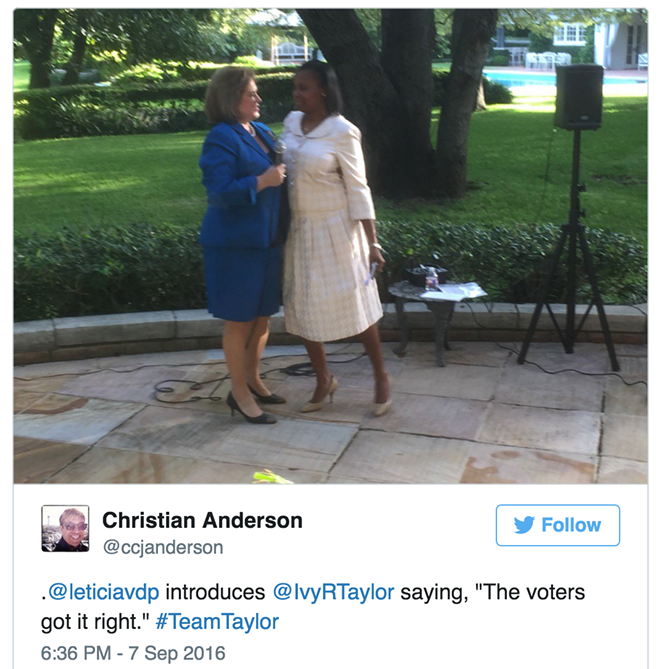 Her entrance immediately disrupted the field, splintering the voting block that had been seen as a dead lock for Mike Villarreal, another former state lawmaker who'd announced early on that he'd challenge Ivy Taylor, then an interim mayor who ultimately reneged on her promise not to seek a full, elected term.

As many had expected, Van de Putte's local star power sucked up the oxygen in the crowded field of challengers. By the time she made it to a runoff with Taylor, things, as often happens in politics, got ugly. At the end of one Texas Public Radio debate, when Taylor's husband and a curious east side shooting came up, Taylor was caught on camera refusing to shake Van de Putte's hand. A shocked Van de Putte responded by mouthing, "Wow."

Which is why some might be surprised that Wednesday afternoon, at a private event to support Taylor's run for a second full term, Van de Putte introduced the mayor this way: "The voters got it right." A consultant who worked on Van de Putte's mayoral race (who, word has it, is now working for Taylor's campaign) tweeted a photo of the two former rivals with the quote, which Taylor then shared with her followers, adding that she was "incredibly grateful and humbled" by Van de Putte's support.

I am incredibly grateful for and humbled by your support @leticiavdp https://t.co/LxiZk1Q0OJ


In a phone interview Thursday morning, Van de Putte said she's decided to officially endorse Taylor because of the mayor's many accomplishments within her first term — particularly, she said, the brokering of a police union contract that council passed last week, ending years of legal gridlock between the city and the San Antonio Police Officer's Association. The union had backed Van de Putte in her unsuccessful bid for mayor. Considering Taylor's two likely challengers — council members Ron Nirenberg and Rey Saldaña — voted against the contract last week and vocally opposed it, it seems all but certain the union will throw its weight behind Taylor once campaign season kicks into gear. (Van de Putte, when talking about the contract, even said that Taylor was "more generous than I would have been" in negotiating the final terms of the contract.)

Van de Putte acknowledged that last year's race was "a painful defeat for me personally," but says that she's been able to work with Taylor since the election and is confident in her leadership. As for how the two have gotten past the acrimony that rankled the end of the last mayoral campaign, Van de Putte put it this way:

"Grownups know that a lot of things are said and done in a campaign. ... Come on, Barack Obama asked Hillary Clinton to be Secretary of State. We're grownups. How many times in business do you have adversaries that become your business partners? Politics is no different. You look at what your end goals are."