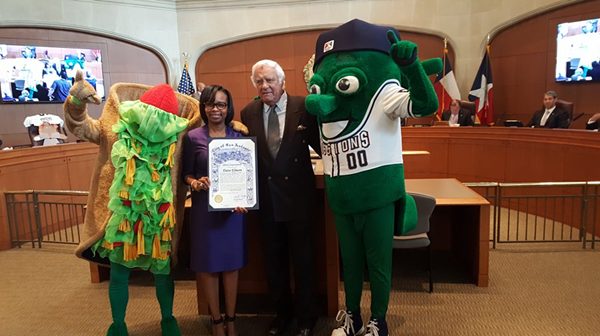 The Current reviewed the 42-page document and found it to be sopping wet with rah-rah, advertorial, Richard Florida-type romanticism, which is to be expected given Centro San Antonio’s focus on attracting high-dollar developers to the central core. Instead of acknowledging any potential downsides of the outdated taxpayer-funded stadium model, the June 14, 2016 report focuses on tax-revenue-generation benefits, job creation benefits and “quality of life” benefits such as “provides publicity for the City” and “enhances the assembly venue inventory” — whatever that means.

In addition to the beneficial impacts from the market cost of living, the average household income in the San Antonio market is projected to grow by 5.65% over the next five years. While the growth will not impact the San Antonio market ranking, the expected growth rate is higher than four of the nine comparable markets. Like the projected growth in population and households, the data is indicative of a solid and sustaining market.

A second study, commissioned by the City and executed by the Manhattan Beach, California-based Barrett Sports Group, took the 11 potential ballpark sites identified in the Centro San Antonio study and narrowed the list down to seven sites. The potential locations included Alamo Street near the Henry B. Gonzalez Convention Center, three sites near Fox Tech High School and an area near the downtown campus of the University of Texas at San Antonio.

Mayor Ivy Taylor didn’t like what she heard during a closed-door meeting between city officials and the Barrett Sports Group, which summarized the findings of its 251-page report at a confab attended by District 8 City Councilmember Ron Nirenberg, who has been a vocal critic of the Taylor-led initiative. Shortly after the September 14 meeting, Taylor scrapped her once gung-ho plans for Triple-A baseball because a developer hasn’t taken the bait.

That is, she sort of ditched her plans.

Though Taylor said that a new ballpark won’t be part of the $850 million bond that goes before voters in May 2017, she hasn’t completely ruled out trying to score Triple-A baseball sometime after 2019.

“I guess what I would say I foresee is that if there is a viable proposal that comes forward that has substantial private-sector support from [San Antonio Missions owners David Elmore] or anyone else, I would certainly want to bring that to my colleagues, and depending on the level of city investment, we’d determine how we want to move forward,” Taylor was quoted as saying in a San Antonio Express-News report.

“This foolish journey is not over,” Nirenberg told the Current by phone. “Meanwhile, we’re spending money and resources on trying to find a developer for a Triple-A stadium.” Though a dollar amount wasn’t included in a City of San Antonio memo about the study acquired by the Current, Nirenberg says City-commissioned studies typically fall in the $25,000 to $30,000 range.

Nirenberg outlined what he considers to be pressing financial needs for the city. Baseball, surprisingly, wasn’t one of them.

“San Antonio needs a 21st century transport system – just transportation in general, not mode specific – to keep citizens out of gridlock,” Nirenberg told us. “There’s Hemisfair improvement that deserves to be completed, major infrastructure needs around schools to keep students safe, a burgeoning Tier 1 university with Division I athletics that don’t yet have first-rate facilities and a park system that still needs investment and infrastructure. It’s a shame that we get distracted by this minor-league dance.”